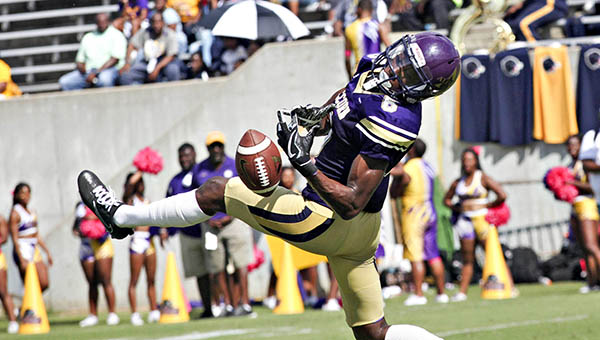 A weekly recap of how players from Vicksburg-area high schools performed in college football and NFL games over the weekend:

• Alcorn State wide receiver Tavares Johnson Jr. (Vicksburg High) caught three passes for 41 yards, and had one rushing attempt for minus-5 yards in a 34-21 win over Prairie View A&M.

• Cornell College (Iowa) running back Patrick Brown (Vicksburg High) caught five passes for a team-high 55 yards in a 56-28 loss to Lake Forest College. He also returned one kickoff for 16 yards and assisted on one tackle.

• Delta State cornerback Devontae Wilson (Warren Central) assisted on one tackle and had one pass breakup in a 28-25 win over West Florida.

• Belhaven linebacker Denarrius Noel (Hinds AHS) had a team-high 11 solo tackles and one sack in a 60-31 loss to Southwestern University. Offensive lineman Steve Cooper (Vicksburg High) started at left guard for the Blazers.

• Central Arkansas safety Michael Ware (Warren Central) had one solo tackle and one pass breakup in a 24-20 win over Stephen F. Austin.