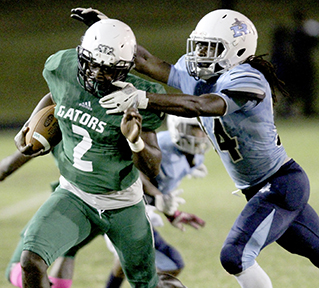 Vicksburg High’s Joe Johnson (2) runs with a Ridgeland High defender in tow during Vicksburg’s 2017 Homecoming game Friday in Vicksburg. The Gators won the game and find themselves in the thick of the Region 2-5A playoff race as they travel to Canton Friday night. (Courtland Wells/The Vicksburg Post)

Three weeks ago the Vicksburg Gators looked dead in the water coming off a 30-7 drubbing at the hand of Germantown in their region opener.

The Gators struggled in every facet of the game committing four turnovers and 14 penalties on either offense or special teams as they lost their fifth straight game to start the season.

Then they hit the road to Neshoba Central, and suddenly a different Vicksburg football team was on the field.

The Gators gained 172 yards on the ground and quarterback Joe Johnson threw for two touchdowns and ran for one more as the Gators earned their first win of the season, 23-0 over Neshoba in a key region battle.

Suddenly a season that looked all but over a week early had a spark of life including the realistic chance of making it to the playoffs.

“Coach Breland got us and told us the reality of the situation is seniors got to step up and seniors got to make plays and the seniors have to lead our team,” linebacker Nick Anderson said of what changed for the Gators. “It touched our heart and we had a senior meeting and said it is time to handle business.”

The Gators carried the momentum into the next week’s game against undefeated Cleveland Central battling back and forth throughout the game and having a chance to win it late before falling 21-14.

“Like I told the kids, this is a game that shows us we can play with anybody,” head coach Lorenzo Breland said after the loss to Cleveland. “When they’re coming undefeated and we’re down by one at the half and it is a tough ballgame for four quarters, what more can you expect? Any time kids give effort and the game is close in the fourth quarter with a chance to win that is the best situation you can be in.”

With four region games remaining on their schedule and sitting at 1-2 in Region 2-5A, the Gators controlled their own destiny to make the state playoffs heading into last Friday’s homecoming game. Their hopes received a large boost when Anderson clinched a key win over Ridgeland with a third quarter pick-six to put his team up for good.

“Just continuous grind,” Breland said of what sparked the season turnaround. “Just relentlessly the kids coming to work every day. Their effort and their heart. That is one thing we preach, regardless of everything that has been going on we still have a chance to control our own fate and control our own destiny. We are in the driver’s seat so we’ve just got to win one game a week.”

“That is what you play for,” Breland said. “I told the kids that if we make it to the playoffs, everybody is zero, zero. That is what we are trying to do and in order to do that we’ve got to win one game at a time. That starts tonight and that is going to start next week against Canton.”

The format for the second round of the inaugural Red Carpet Bowl 3-Man Invitational golf tournament was what’s called a... read more