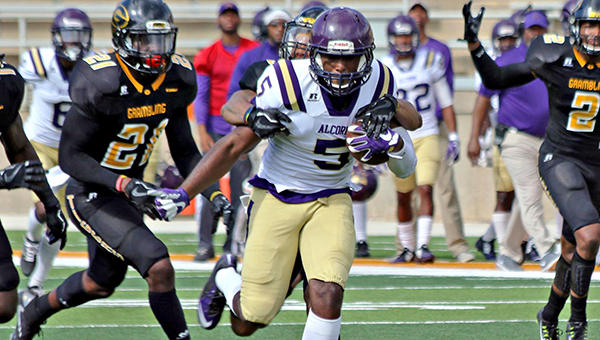 If they do, Grambling gave the Braves plenty to think about.

Devante Kincade threw for 268 yards and two touchdowns and ran for another score as Grambling used the second quarter to pull away from Alcorn 41-14 on Saturday.

Kincade ran for a 17-yard touchdown in the first quarter and then threw a pair of TD passes in the second to give Grambling a 24-7 lead at halftime.

Grambling (6-1, 4-0 SWAC) added two defensive touchdowns in the second half to complete the blowout of Alcorn (5-3, 4-1) in the showdown between the conference’s two division leaders.

“Well, the biggest thing was we came out today as if we’ve never seen a football before,” Alcorn coach Fred McNair said. “It’s like our guys didn’t know what formation to be in. These are things we do every single day but we couldn’t get set or lined down. That’s inexcusable.”

Grambling and Alcorn have met in the last two SWAC championship games, and are still on pace to do it for a third time in Houston in December. Grambling leads the West Division by two games, while Alcorn has a half-game lead over Alabama A&M in the East.

Alcorn has a bye next week, and then hosts Alabama A&M on Nov. 4.

“We have to find a way to get better before our next game. The bye week couldn’t come at a better time for us,” McNair said. “We’re going to get some of our bodies healed, and we’re going to go back to the basics. We didn’t execute or do many things right. We just played bad football today and that’s on the head coach.”

De’Lance Turner rushed for 107 yards and two touchdowns on 17 carries for Alcorn. His 5-yard TD early in the second quarter tied the game at 7, but Kincade helped Grambling rip off 17 unanswered points before halftime.
Kincade threw a 53-yard touchdown pass to Calief Samon and later found Marquise Kaigler for an 18-yard touchdown with six minutes remaining for a 21-7 lead.

Marc Orozco kicked a 40-yard field goal just before halftime and a 33-yarder with 5:12 left in the third quarter to push it to 27-7.

Grambling’s defense then flexed its muscle, scoring on a 51-yard interception return by Dedrick Shy and a fumble recovery in the end zone by Quinton Guice.

Alcorn quarterback Noah Johnson was just 8-of-17 passing for 84 yards, with no touchdowns and three interceptions. Lenorris Footman fared no better, going 5-of-12 for 84 yards.

Former Warren Central star De’Arius Christmas had 14 total tackles, one sack and a forced fumble for the Tigers.

La’Allan Clark had 2 1/2 sacks and a forced fumble.

“We can’t have seven turnovers. We emphasize securing the ball every day, but we didn’t do that,” McNair said. “It was everything from simple exchanges from the quarterback to the running back, to muffing punts. We don’t allow that, and especially against a good football team. My hats off to Coach Fobbs as he does a great job with that team. When you’re playing against a team of that quality, you can’t have these turnovers.”

My mother was 78 years old when she was diagnosed with breast cancer. She died a year later, almost exactly,... read more