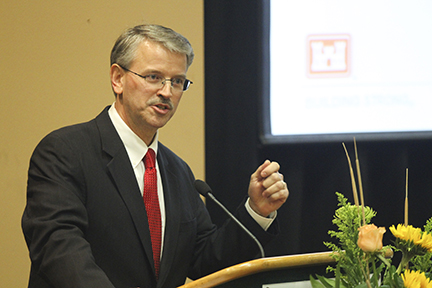 Vicksburg and the U.S. Army Corps of Engineers have a long relationship that has been going on longer than the U.S. Army’s Engineer Research and Development Center, previously called the Waterways Experiment Station has been in the city, and ERDC’s new director believes that relationship will be getting stronger.

“Our histories are so intertwined. We are integrated in community and hope to be more so in the future,” ERDC Director Dr. David Pittman said.

Vicksburg, he said, “Is the biggest Corps of Engineer town in the world. It’s ground zero for the Corps of Engineers, and it not just because the ERDC is here. You have a division of the corps of engineers here (the Mississippi Valley Division), district headquarters, (the Vicksburg District); and the Mississippi River Commission.

“You’re the Mecca for engineers — for Army engineers around the world.”

The Corps and ERDC, Pittman said, has a big investment in Vicksburg and Warren County with 90 percent of its workers living here.

“We’re involved in the community, we’ve taken leadership roles, but one of the biggest things we’re doing is helping to grow our future STEM (science, technology, engineering and math) leaders,” he said. “This is a national problem we have; it’s almost a national epidemic.

Pittman said the partnerships with ERDC and the Vicksburg Warren County School District are aimed at improving education to make the area school district among the best systems.

Looking at ERDC’s economic impact on Vicksburg, he said ERDC has an $108 million payroll with 1,573 employees and contractors living in Vicksburg. It has $160 million in contracts with $29 million of that going to in-state contractors.

“That is going to grow in time, as we do the kinds of things we do for the warfighter and the nation,” he said.

“We’re hiring like crazy; we’re still hiring. We’re in a growth mode, and this excellent relationship with Vicksburg and Warren County is helping do that.”

He said, however, some ERDC employees are approaching retirement age, creating a dilemma for officials and they deal with the prospective loss. He said the change is resulting in younger workers undergoing leadership training so they can move into the vacancies and continue the process of meeting the country’s needs.

Pittman said one area ERDC is working to improve technical training is plans to increase its graduate institute program. “We want to take it off campus and make it bigger and open it to other private industry.

“They have the same problems we do; this is not just ERDC. So we are trying to look beyond engineering and science training to administrative training and technician training.”

He said ERDC is also exploring expanding technology transfer to allow ERDC to make a bigger impact and be able to transfer its technology to the private sector.

He said work is underway to form partnerships through an intermediary agreement that would allow technology transfer.

“It’s going to be another route to get our intellectual property into the private sector. These are the kinds of things we’re looking at to be of better value to the taxpayer. How do we make that kind of impact we can make in the future.”

Two candidates in the special election for state House District 54 said they would support a lottery as a means... read more