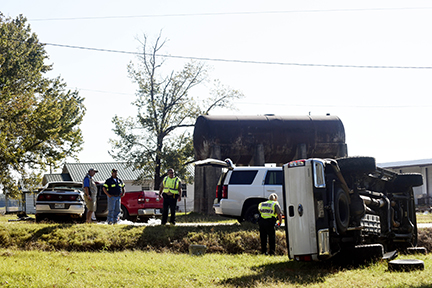 Warren County Sheriffs Department, Bovina Fire and EMS respond to a three-vehicle wreck at the intersection of Bovina Cut-Off and Duncan roads Tuesday. The cause of the wreck and injuries is still to be determined. (Courtland Wells/The Vicksburg Post)

Two people were injured in a three-vehicle wreck Tuesday morning at the intersection of Bovina Cutoff Road and Duncan Road.

Warren County sheriff’s deputy Connie Ricketts said a 2004 Chevrolet Impala driven by Lawrence Adams, 51, of Vicksburg was westbound on Duncan Road and attempted to cross Bovina Cutoff Road when it collided with a southbound Ford F-250 pickup driven by Scott Kirk, 44, of Madison.

The impact of the collision caused Adams’ car to spin and collide with a northbound Ford F-150 driven by George McDuffie, 58, of Edwards. After hitting the Impala, Kirk’s truck went into a ditch on the west side of the road and rolled on its side.

Ricketts said McDuffie and Adams were taken to Merit Health River Region, where they were treated and released.