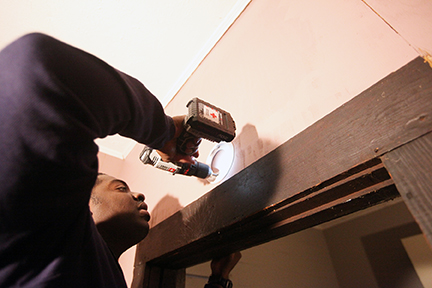 Residents of 20 households in Vicksburg can sleep easier now knowing they will be alerted if a fire starts in their home.

This is the third full year of the program and in the last two years the Red Cross has installed more than 11,000 free smoke alarms in Mississippi including more than 500 in Vicksburg alone. Their goal this year is to install at least 8,000 throughout Mississippi.

“Normally we install, depending on the number of bedrooms being used and the amount of living space, about three smoke alarms per home,” Davis said. “It has to be a living, primary residence and not a business. It is anyone. It is free.”

Monday they received help from four Vicksburg firefighters who were tasked with checking existing smoke alarms in the homes they visited and installing additional ones where needed.

“Usually three would be a good number,” firefighter John Hogan said. “We like to put them in bedrooms and common areas whether that be a dinning room or close to the kitchen area. You could be asleep. You could be outside. These smoke detectors, especially these new ones, are very loud. They alert you as soon as a potential problem develops.”

The program’s goal is to reduce the loss of life and property due to fires by 25 percent in the next five years, Davis said. Along with installing the smoke alarms, the Red Cross works to educate the homeowners about fire safety while visiting their home.

“Smoke alarms are so important because it helps individuals to get out,” Davis said. “Sometimes they don’t realize they only have two minutes before a home can be fully engulfed in flames to get out. That is another part of our home fire campaign is we help the homeowner to establish an escape plan and given them information on how to prepare.”

Hogan echoed that sentiment, saying households having some alarms makes their jobs as firefighters easier.

“It takes a load off us just a little bit,” Hogan said. “As soon as an alarm goes off, people know there could be a potential problem and they can determine for themselves at that time whether they see smoke and that can help us as we are being dispatched.”

The first occupant of the Vicksburg Fire Department’s Independence 3 Station is already in place. Ladder 3, the fire department’s... read more