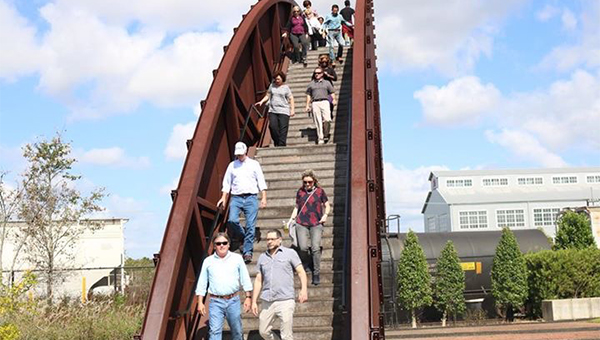 The city of Vicksburg’s plan to revitalize the riverfront took a big step forward Thursday when representatives from the city took a tour of New Orleans’s redeveloped riverfront.

The city of Vicksburg was invited to New Orleans by architecture firm Eskew+Dumez+Ripple, which redeveloped the New Orleans riverfront in 2015 and has also worked on the riverfront in Chattanooga, Tenn., and Montgomery, Ala.

The group visiting New Orleans included the Board of Mayor and Aldermen, representatives from the Riverfront Redevelopment Committee, the chiefs of the police and fire departments and members of the chamber of commerce and visitor bureau boards.

“I think it was time well spent,” chamber president Mark Buys said. “The architecture firm we visited with has a tremendous amount of experience in riverfront development. We were in the right place. We toured a portion of the riverfront park because it is broken up into different sections because of the commercial development.”

The group toured Crescent Park and met with the architecture firm to talk about what went into the project and how it has been managed since its completion during the daylong trip.

“As far as I am concerned, it was very productive,” Mayor George Flaggs Jr. said. “It gave us a visual of how our riverfront can look if we make the investment. I think the architecture was very hospitable and very professional and straightforward. I left with the takeaway that all we need is to do it and I have intentions of trying to have it done in the next two years to improve and enhance the riverfront.”

Representatives who participated in the tour said that while they may not be able to do everything New Orleans did, they can certainly take bits and pieces to improve the riverfront in Vicksburg.

“One thing I liked was they had swings on the river,” Kim Hopkins, the executive director of Vicksburg Main Street, said. “I thought that was really cool for you to sit down and watch the river on the swings. They had a lot of different kinds of art along Crescent Park and the riverfront and I would like to see that. All of it was very good and informative.”

Buys said he liked the fact that the architecture firm was able to work with some of the same issues facing Vicksburg and use them to the advantage of the design.

“They dealt with the same issues that we have and that is with the seawall and also with the rail,” Buys said. “They gave us some good ideas on how to handle that. It was real impressive and they know what they’re talking about.”

In Crescent Park, a bridge was built over the seawall and railroad tracks connecting the two sides of the park. It is outside the box ideas like that, which interested in the tour group.

“They had a lot of greenery in the park and they have rehabbed old wharfs and you can perform there, you can have farmers’ markets there and stuff like that,” Annette Kirklin, executive director of the Vicksburg Convention Center, said. “They really used something you wouldn’t think would be useful.”

“They (New Orleans) redeveloped their riverfront around the culture of the city and that is exactly what we’ve got to do. That is the model we’ve got to use,” Flaggs said. “We’ve got to say welcome to Vicksburg in the biggest way. It may cost a little money, but it is worth it. The economic impact of it is well worth it according to New Orleans.”

Local veterans to be honored