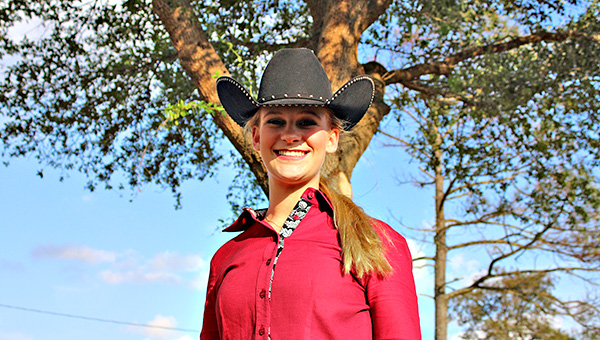 Tallulah Academy junior Emmy-Lu Marsh is one of the country’s top young equestrian riders and has committed to sign with Texas A&M next year. (Ernest Bowker/The Vicksburg Post)

TALLULAH — Whenever a stranger finds out Emmy-Lu Marsh rides horses competitively, she cringes and awaits the inevitable follow-up question.

“People ask, ‘When’s your next race?” she says, a hint of acceptance but also annoyance spreading across her face. “I have to tell them we don’t have a race.”

In an area where barrel racing and other rodeo events rule, Marsh found a different horse sport to excel in. The Tallulah Academy junior is one of the country’s top young equestrian riders, and recently committed to compete for Texas A&M as part of its 2019 signing class.

Texas A&M is the defending National College Equestrian Association (NCEA) champion in equestrian. Marsh won’t sign until next November, but said the program’s reputation and a visit easily swayed her to commit early.

“I feel like Texas is more my kind of place. I fell in love with the town and the school and everything. Growing up, I’ve been to Texas so many times that it felt like home,” Marsh said. “It’s amazing. I went from being unknown to one of the biggest universities in the country to ride for them.”

While many rodeo events are timed, most equestrian events require riders and their horses to perform slower precision movements. Marsh’s specialty is reining, where riders guide the horse through a set pattern and earn or lose points from judges according to how well they perform.

“You spin and slide in circles. It’s a pattern kind of thing. It’s not a speed event,” Marsh said.
Marsh started riding horses when she was 4 years old, and eventually segued into equestrian competitions a few years later. It didn’t take long for her and her family to realize she had a future in it.

In 2014 — just two years after she started competing — Marsh won the U.S. Equestrian Foundation’s 13-and-under national championship in reining. She won the 14-18-year-olds’ national title the following year and again in 2016.

“In eighth grade I ran for the world title. That was when I realized I could be pretty good at it,” Marsh said.

Since then, Marsh has only added to her list of accolades. She’s finished first in 29 of 31 American Quarter Horse Association competitions that she’s been in, along with numerous titles in other AQHA and NRHA shows.

As she heads to Texas A&M, Marsh is eyeing a chance to compete in the World Equestrian Games and Youth World Cup — both major events on the sport’s calendar — in the next few years.

With so much potential in her sport, it’s no wonder Marsh laughs whenever she’s asked another sports-related question.

She also plays basketball, but at a small school like Tallulah Academy where football and cheerleading rule, she often has to explain why she’d rather be away at a horse show most weekends.

“People were saying, ‘Why don’t you want to be a cheerleader or play this or that?’ Because I don’t want to!” Marsh said. “I missed my first four homecomings.”