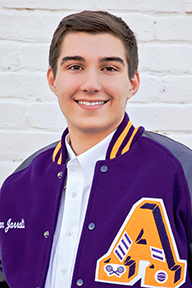 St. Aloysius senior Ryan Jarratt has been recognized as one of the top scholars in the nation. (Submitted/The Vicksburg Post)

St. Aloysius senior Ryan Jarratt has been recognized as one of the top scholars in the nation.

Jarratt has been chosen as a 2018 National Merit Finalist. He is the only National Merit finalist in Warren County for 2018 and one of 15,000 nationwide. He is also the only student from Mississippi to be selected as a finalist for the prestigious Coca-Cola Scholars award and one of only 250 nationwide from a pool of more than 90,000 applicants.

“It is really gratifying to have been selected,” Jarratt said. “A lot of the credit does go to the St. Aloysius faculty. They’ve always kept me challenged in the classroom and we have an incredible guidance counselor, Jackie Loyacono, who has always helped me to find opportunities outside the classroom as well.”

“I was extremely happy to know that all the work I have put in has come to fruition,” Jarratt said.

The Coca-Cola Scholars program weighs academic performance as well as a student’s leadership and community service activities. Jarratt has logged 1,400 service hours while in high school including time spent volunteering with Jacob’s Ladder and Hands and Feet Ministries.

“That was absolutely incredible for me,” Jarratt said. “The Coca-Cola scholarship is more slanted towards leadership and community service, and to be recognized on a national stage for my work in those two fields is beyond incredible.

“To be recognized as one of the biggest leaders and servers in my age group in the entire state is incredible. It is incredible to know I am having that big of an impact.”

Out of the 250 finalists for the Coca-Cola Scholars program, 150 students will receive $20,000 scholarships. The next step in the process is a Skype interview with program officials in two weeks, after which he will be notified. Jarratt said he has preparing for the interview by working on possible questions and working on his public speaking.

After high school, Jarratt said he plans to major in biomedical engineering, but he is still waiting to hear from multiple colleges before deciding where to go.

Smith shows students the art around them