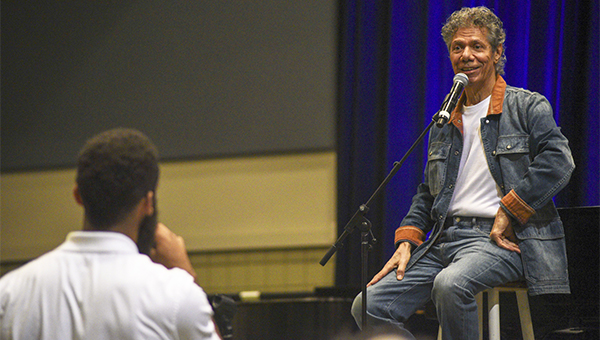 Chick Corea speaks during a Question and Answer session prior to his performance as the headliner of the 38th Annual Alcorn State Jazz Festival at the Vicksburg Convention Center Saturday. (Courtland Wells | The Vicksburg Post)

The weather outside the Vicksburg Convention Center was rugged, but the music inside was in the groove as high school and college jazz ensembles and jazz legend Chick Corea performed selections for people attending the 38th annual Alcorn State University Jazz Festival.

A total of 600 people either participated and/or listened to music delivered by the ensembles and Corea during event. As the day progressed, musicians broke into jam sessions in the convention center meeting rooms and members of the Mississippi Jazz Educators put on a performance before Corea took the stage at 8 p.m.

Corea also put on a jazz workshop for the students and teachers, answering questions and playing, and closing by encouraging students with an interest in music to pursue it, “Because the world needs more of us.”

His Saturday night performance filled one of the convention center exhibition halls, as he held an interactive concert, playing music and talking with the audience.

His selections were not from his own work, but from some of his favorites composers, starting with a combination of music from Mozart with George Gershwin’s “Someone to Watch Over Me,” and other selections including composers such as Antonio Carlos Jobim, Bud Powell and Stevie Wonder, and Bill Evans and Thelonious Monk.

One object of the festival, director Dr. David C. Miller said, is to increase the awareness and appreciation of jazz in the area.

“The festival is important in teaching young people about jazz,” he said.  “I think it’s very important; I would love for more people to come. I do everything I can to get the word out.”

Miller said he would like to see a program where young people are brought to the festival by bus, or an effort to tell parents about the festival so they could bring their children.

“I want to reach the kids more than anything, and when they can see their peers performing at a high level like most of these schools do, they could be more inspired to find out more about the music,” Miller said.

Students, he said are constantly exposed to commercial music through radios and apps, and with the exception of Jackson State University’s student radio station, most Mississippi radio stations don’t include jazz in their programming.

Young people don’t get a lot of exposure to jazz, he said, “And so many of them, when they hear it, a light bulb goes off and they’re experiencing another level of music, and that’s what we want to expose them to.

“It’s really important that kids get something to seek and to strive for, and they realize it’s a lot of work to get to the high level of jazz. It keeps them off the streets. It’s something they can work toward; it’s a great positive influence.”

Miller said one of the best things about the festival is it allows students to hear other groups from other areas of the country perform.

He added the festival and its list of top jazz musicians and legends who come teach and perform has developed a reputation that attracts a wide group of people.

“Every year, we have people come in from really far away, coming into Mississippi to be part of this,” he said. “The word is really out.”

He said he recently received a text from someone in Holland who heard about the festival, researched it online, “And came all this way from Holland to be here.

“There’s a big appreciation for jazz in Europe, more than there is in America. They have many very large jazz festivals, and artists like Chick Corea play in those festivals, and it costs an arm and a leg to hear them.

“I really wish people would take more advantage of this festival and come and see these great performers for free.”

Contestants help to raise the roof

Vicksburg’s stars were out on Saturday night at the Raise the Roof talent show, where 13 contestants competed for cash... read more