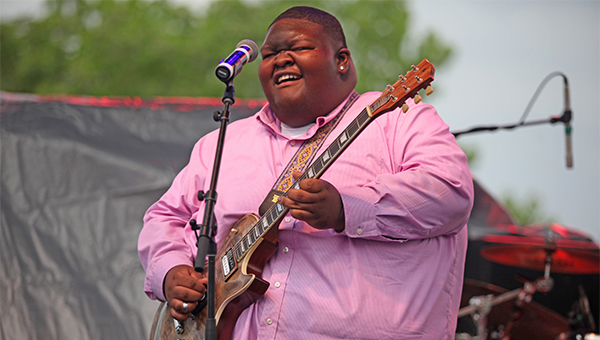 Christone “Kingfish” Ingram plays the blues at Riverfest Revamped last Saturday. Ingram has been playing live since he was 11, and is planning to relase his debut album this year. Cody Thomason/The Vicksburg Post

At the age of 11, Christone “Kingfish” Ingram began cutting his chops in Morgan Freeman’s Ground Zero blues club and other venues around town, starting off on the drums and later picking up the bass guitar as well. At the age of 13, Ingram picked up the guitar, and from there the legend of Kingfish started to grow even faster.

Fast-forward six years, and Kingfish’s music is making a splash internationally. His guitar has carried the blues as far as France and even to the White House to perform for former first lady Michelle Obama. But last week, it took him back to Mississippi, to Vicksburg as a part of Riverfest.

“It was amazing because there was a good amount of people out there, but by the time we did our last song it was kind of packed,” Ingram said.

That can often be the case with Kingfish’s live shows. It might not start off packed but soon the sounds of his guitar and smooth vocals bring forth a crowd of fans that just have to see who can still make music like that.

“That was cool, that was my first time playing in Vicksburg,” Ingram said.  “I saw some friends, made some new ones, the crowd was nice. It was awesome.” 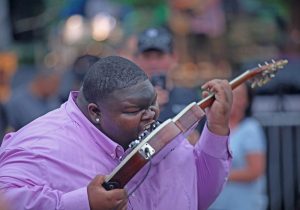 Christone “Kingfish” Ingram plays the blues at Riverfest Revamped last Saturday. Ingram has been playing live since he was 11, and is planning to relase his debut album this year. Cody Thomason/The Vicksburg Post

Ingram grew up in Clarksdale, a town whose slogan is “The birthplace of the blues and rock ‘n’ roll!” and for good reason, with the Mississippi Delta spawning bluesmen like Robert Johnson and Clarksdale being the birthplace of artists like Sam Cooke and Earl Hooker.

Ingram was introduced to the genre at an early age. His neighbors were in a blues band, and local greats like Terry “Big T” Williams and Josh “Razorblade” Stewart would frequent their house. Ingram met them around age five or six, and years later was playing with them on stage.

Around the age of 15, local news outlets were starting to pick up on the buzz surrounding him, the national scene soon followed. Ingram eventually made appearances on the Rachael Ray and Steve Harvey shows and was dubbed a prodigy. If you see him live, it doesn’t take long to see that moniker hasn’t been thrown around lightly.

Ingram knows he was eschewing the normal when he began playing the blues, but said it wasn’t just the genre that called to him, but also the history of where he grew up. When he plays guitar, you can tell Ingram’s not just playing music for himself. He’s also playing for the ghosts of the blues in the Mississippi Delta that paved the way so many years ago. 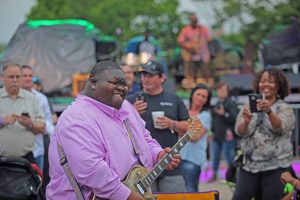 “It’s apart of my culture, and you don’t see too many young black kids that are into it,” Ingram said. “The blues is our history, our culture, so it’s something that we need to embrace and that we need to learn about, so I just wanted to keep my history going.”

This year, the very first Kingfish album will be released after Ingram recorded it at Ocean Way Studios in Nashville. Ingram worked with legendary songwriter and producer Tom Hambridge on all but one of the songs. Ingram and Hambridge clicked quickly, and were able to write a few of the tracks in just one day.

The album is a long time coming for Ingram, and he said he was excited to finally share his own voice and show how he sees things.

Ingram has never forgotten his southern roots, and still tours around Mississippi frequently.

“It’s like a big pot of gumbo,” Ingram said of his home state. “All these things mixed up. It makes the statement, good people, good music, good food, and southern hospitality. Although we do have our bad pieces, racism and everything, you just can’t let that stuff stagnate us, ’cause we have all these other positive pieces about us.”

A call about a burglary in progress at the Warren County line Thursday afternoon resulted in five people being held... read more