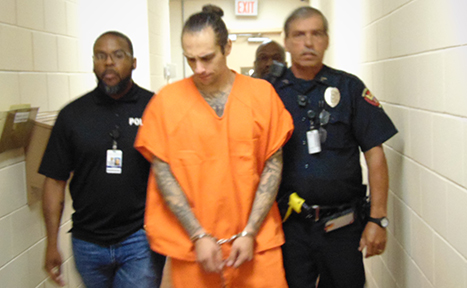 A Clinton man charged with strong-arm robbery in the theft of money from a cash register at Walmart is being held in the Warren County Jail in lieu of $250,000 bond.

The bond was set for John Salvatore Digennaro 29, 211 Grand Oak Blvd., Clinton, Friday at an initial appearance in Municipal Court. Police said Digennaro has a hold placed on him by the Mississippi Department of Corrections, and he has outstanding warrants from Ridgeland and Clinton police.

Digennaro is accused of walking into the Vicksburg Walmart Thursday, going to a register and then shoving the cashier and taking money from the register after she opened it. He left the store and got into a red Nissan, which was later seen in Clinton. When police tried to stop the car, he fled, wrecking the car and then running away from the scene.

He was later arrested by Clinton police and returned to Vicksburg.

No one was wounded in the exchange of gunfire, which occurred about 4 p.m. Sunday.

Stewart and Coleman are accused of shooting at each other from their parked cars in the store parking lot. Both cars had multiple bullet holes. Bingham was a passenger in the car driven by Coleman.

Arthur Derwin Belcher, 52, 174 Central Ave., was arrested about 8:41 p.m. Wednesday and charged with discharging a firearm inside the city limits.

The stabbing occurred during an argument Thursday about 9:35 a.m. at the corner of Wisconsin Avenue and Autumn Drive. Edwards said a warrant has been issued for the man, who was not identified.

The case is under investigation.