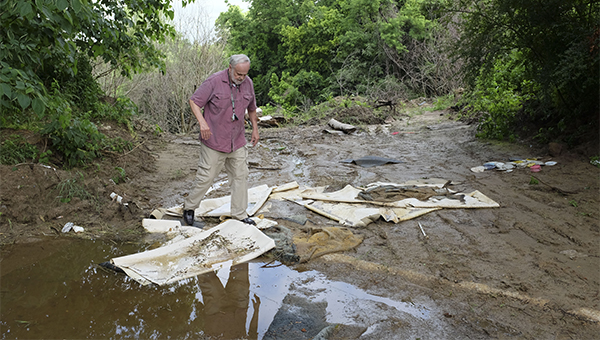 Frederick Briuer stood on the pavement at Snyder’s Bluff near the site of Fort St. Pierre and looked at the trash and garbage flowing out of trashcans and trashbags and littering the ground.

“I wonder how people in town would feel if trash was dumped on some of Vicksburg’s national landmarks like Pemberton’s Headquarters,” he said.

Briuer is chairman of the Fort St. Pierre Tercentennial Planning Commission, an organization planning the 300th anniversary of the building of Fort St. Pierre on the Yazoo River. The fort, which was built in 1719, is one of two sites from the French and Indian period to be designated National Historic Landmarks in Mississippi. The other is the Natchez Grand Village.

The site, which is also home to Civil War earthworks, is located off Mississippi 3, south of International Paper. It is marked by a bronze plaque that has been blackened by age and the weather. Access to the site is a paved road that was once the access to the St. Peter bridge, which was razed in the mid-1960s. And it has at times been the site of illegal dumps.

“It’s a hideous mess. MDOT just came in and mowed the area and cleaned it; before they did, I found a dishwashing machine someone dropped off here. I’ve seen furniture, dead animals. People are constantly throwing their trash here,” Briuer said.

Briuer believes there are two reasons that make the site attractive to people wanting to dispose trash and unwanted items. One is its location off the highway. The second, he said, is ignorance of the site’s history. “No one knows the importance of this site,” he said.

“Most people don’t even know the French were here. The French descendants (in the area) never heard of the French being here. We’re doing our best to raise awareness of this national landmark site.”

Fort St. Pierre, Briuer said, was built to provide a link between the French colonists on the Mississippi Gulf Coast and the French colonies in the Midwest and Canada and keep the British out of the area. The idea was to take advantage of the French alliance with the Tunica Indians, who had left the area in 1704.

“There were French colonists at Walnut Hills and further south all the way to Bayou Pierre (in Claiborne County),” he said. “There was a sizeable French population here.”

But the French experience in west central Mississippi ended in 1729 when the Yazoo and Chickasaw Indians attacked the fort and massacred the soldiers and colonists who lived near it. The Indians captured some women and children who were later rescued by the Choctaw Indians.

“The French and Indian component is really rare,” Briuer said, “because the only forts that we have, basically have been destroyed. Fort Rosalie in Natchez (the site of another massacre) was bigger and had a larger population, but for all we know, it eroded off the Natchez Bluff during the Civil War.”

Fort St. Pierre, he said, is in remarkable condition because it is in a forested area that protected it from erosion. Archeologists, he added, have collected “several thousand artifacts” from the site.

But just as important is the site’s potential as a multiple historic location, because it contains earthworks that were part of the Confederacy’s fortifications guarding the Yazoo River, Briuer, who was an archeologist for the U.S. Army Corps of Engineers, said.

“When they (archeologists) excavated for Fort St. Pierre, they also excavated into the remains of Confederate earthworks and artifacts,” he said. “This is the only part of the entire Confederate fortifications of the Yazoo from here all the way to town.

“This area became a very important Confederate supply area. When the Confederates abandoned it in mid-May 1863, the Union came in and took it over and it became a vey important Union supply depot.”

The Confederates, he said, built their earthworks on the remains of Fort St. Pierre, and the French built Fort St. Pierre on top of prehistoric remains.

He said the Fort St. Pierre Tercentennial Planning Commission has applied for a grant to install a state historic marker and interpretive landmarks at the site to tell the story of Fort St. Pierre and the Civil War experience, but added, “It completely defeats the purpose of putting up interpretive signs to welcome the public to sites like this if it’s covered with trash and reeking dead animals.”

Briuer said commission members have talked with law enforcement agencies, and volunteers in the Redwood community have volunteered to watch the site with instructions on what to do and how to notify authorities if they see someone dumping.

The members have also talked to the Warren County Board of Supervisors about seeking a grant to clean the area.

“What’s needed is some arrests, and trial and conviction, and then once we get a successful prosecution and fine, put it in the paper,” he said.

Alisa Harvey had just secured the balloons for her son Cameron in the lobby of the Vicksburg Auditorium and was... read more