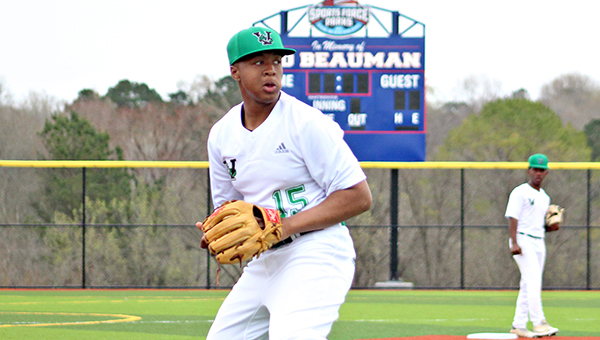 Vicksburg High baseball coach Antonio Calvin has seen enough from his team this season to know a state championship run is probably not in the cards. He’s also seen enough to know that they are capable of stealing a win and maybe even a series from anyone who takes them lightly in the postseason.

Vicksburg (8-12) will begin the Class 5A playoffs on Saturday with a road trip to Saltillo (14-7) for Game 1 of a best-of-three series. Calvin, who is winding down his first season as coach, said it’s more of a measuring stick than anything for the Gators to gauge how much progress they’ve made in the past few months.

“The playoffs are a good opportunity to expand on things we’ve been working on all season long. Anybody can get it on a given day. We’ve grown a lot this season,” Calvin said. “We’ve had to do some addition by subtraction, but that’s helped us a lot. We started with 25 players and now we have 16. A lot of things that were plaguing the program were things we had to work through. We’ve been able to grow and develop into something that has a bright future. Eight-and-12 is by no means a successful season, but you’ve been able to see flashes of what we’re capable of.”

Some of the good flashes from the Gators have still been losses. They were competitive in losses to playoff teams like Pearl, Ridgeland and Germantown, but were often undone when one or two mistakes snowballed into big innings.

Avoiding that, Calvin said, is crucial if the Gators are to have any success against Saltillo.

“That’s what we’re looking for, is consistency from the first pitch to the last, and not freaking out once a mistake occurs,” Calvin said. “We’ve let some games get out of hand due to emotions taking over. You make erratic, less disciplined decisions. We’re trying to limit our emotional outbursts on the baseball field.”

This is the fourth time in 10 years that Vicksburg and Saltillo have met in the playoffs. Saltillo won all three of the previous series, in 2009, 2014 and 2016. Calvin downplayed that history, however, with valid reason. Only four of his players were on the team as freshmen the last time they played each other.

More important, Calvin added, was that his team finally put everything together for a couple of games.

Kendrick Bershell is hitting .422 and Terrance Johnson .385, but no other starters have their average above .300. As a team, the Gators are hitting a modest .259. By contrast, Saltillo has six starters hitting .295 or better and a team average of .291.

“Other teams have outhit us. So we have to consistently put the ball in play and make them throw us out. If we don’t do that, we don’t have a chance,” Calvin said.

Calvin added that the Gators’ goals for the postseason are modest. Vicksburg has not won a playoff series since reaching the Class 4A championship series in 2008 and has a 3-18 postseason record in that span. It has lost nine straight playoff games since beating Saltillo in Game 2 of their 2014 series.

Given that history, winning a game would be noteworthy for the program. Winning a series would be monumental.

“We’re not delusional. We understand the limitations with our depth,” Calvin said. “You have to understand where you’re coming from. We’re traditionally a winning program, but for the last five years it’s been a downturn. We’ve seen flashes of where we can be. We have some talent here, but it’s overshadowed by a lack of discipline. So the playoffs give us the opportunity to look at it from a different perspective. We’re looking at it as having a chance to win a game or two.”