Shooting suspect still on the run

Vicksburg Police are continuing their search for Tony Dewayne Smoots, who is wanted in the April 19 shooting of a teenager in the parking lot of JP&K Foods Convenience Store, 2607 Halls Ferry Road.

Smoots, 20, 502 Farmer St., is wanted for questioning in the shooting of Jamario Hawkins, 18, who was wounded in the incident. 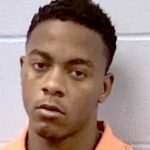 Police on April 22 arrested Darion Turner, 18, at his home at 1314 South St. He is charged with aggravated assault in the shooting and remains in the Warren County Jail in lieu of $100,000 bond.

According to police reports, officers responding about 10:09 p.m. on April 19 to a call of a shooting at the store arrived to find Hawkins with a gunshot wound to the chest.

Witnesses told police the argument between Hawkins and Turner became physical. Turner and Smoots reportedly returned to the Dodge Charger and sped off, and then several gunshots were fired from the vehicle.

Hawkins was transported to Merit Health River Region, where he was listed in stable condition.