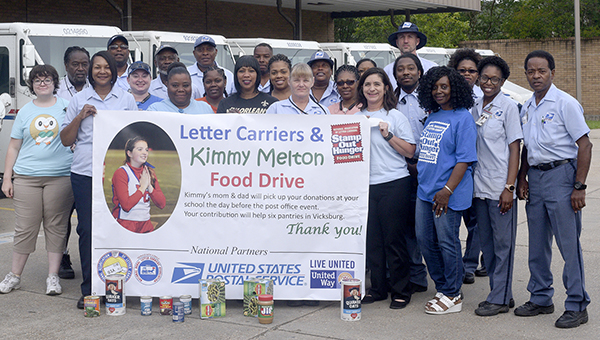 Letter carriers and officials with United Way of West Central Mississippi pose for a photo holding a banner promoting the Letter Carriers & Kimmy Melton Food Drive at the Vicksburg Post Office Tuesday. Members of the community are invited to gather canned goods and non-perishable foods for donation on May 11. Goods left beside their mailboxes will be collected by the letter carriers. (Courtland Wells | The Vicksburg Post)

Did you get your bag?

Saturday, May 11 is National Association of Letter Carriers Stamp Out Hunger Food Drive, and the Letter Carriers Vicksburg Branch 94 have put brown bags in mailboxes in hopes everyone will donate.

“Each year on the second Saturday in May, letter carriers across the country collect non-perishable food donations from our customers,” local letter carrier food drive coordinator Tommy Atlas said.

“These donations will go directly to the local food pantries that provide food to people in Vicksburg who need support,” he said.

Last year, Atlas said, the food drive results were outstanding. More than 220 union branches collected more than 11 million pounds of food, which was a one-day record in the U.S.

“From Alaska to Florida and Maine to Hawaii, letter carriers did double duty by delivering the mail and picking up donations,” he said.

This year will mark the 27th anniversary of the program and in addition to the Vicksburg Letter Carriers collecting non-perishable food items, the local United Way and Eddie and Amy Melton will be helping collect food items in Vicksburg and the surrounding Warren County Area.

“The letter carriers of Vicksburg will be doing the food drive in honor of Kimmy Melton,” Atlas said.

Kimmy, who was the Meltons’ daughter, died in 2012. In 2013, one of Kimmy’s class mates, Caydee Schweitzer, offered up the idea of collecting food items for the pantry as a way to honor her friend.

“She asked for food items to donate to the local pantry instead of presents because their friendship was gift enough for her,” she said.

And in 2015, Melton and her husband began collaborating with the letter carriers and the local United Way.

Having a food drive in May is crucial, Atlas said.

“Food banks and pantries often receive the majority of their donations during the Thanksgiving and Christmas holiday seasons.

By springtime, many pantries are depleted, entering the summer low on supplies at a time when many school breakfast and lunch programs are not available to children in need,” he said, adding, “The need for food donations is great.”

Currently, one in six Americans are food insecure including 13 million children and more than five million seniors over the age of 60, Atlas said.

To participate in the food drive, one can either fill the bag and place it inside or beside the mailbox or just leave non-perishable food donations inside the mailbox.