More wet weather on the way 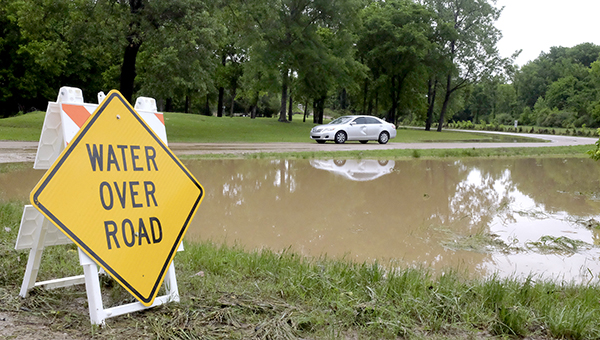 Thursday’s storms are the beginning of more wet weather to come. (Courtland Wells | The Vicksburg Post)

A line of thunderstorms with high winds and heavy rain passed over the Warren County area knocking down trees and shutting off power to scattered Entergy customers in the area.

National Weather Service meteorologist Joanne Culin said the line of storms will be followed by a front that is expected to enter the area and stall over the weekend with a projected rainfall of about 2-4 inches through Saturday, “Maybe higher amounts.”

The storms hit early Thursday morning with torrential rains that caused some local street flooding and some localized flooding in the Eagle Lake area. Warren County Emergency Management Director John Elfer said trees were reported on two homes Thursday morning, one off Mississippi 3 and another on Ballground Road.

Tammy Rankin, Entergy customer service representative, said Thursday morning 2,900 customers were without power. The worst areas were on Burnt House Road and Nailor Road. By 2:30 p.m., the number had been reduced to 350. She said power was expected to be fully restored by late Thursday night.

Deputy Vicksburg Police Chief Bobby Stewart said police worked two minor wrecks during the weather. “We didn’t have any trees down and we had water over the road on Sky Farm (Avenue) and Pemberton during the storm, but no major problems.”

He added no streets were closed.

All the roads were clear, he said, with the exception of Culkin Road, where a large tree with power lines down and blocking Culkin Road behind the Culkin Fire Station.

“We had some extra units out,” Pace said. “We had the full shift and the extra units out to cover the calls as fast as we could. The county road crews were out clearing the roads. We were busy.”

North Ward Alderman Michael Mayfield, who is over Vicksburg’s public works department, said the city came through the morning storms without major problems.

“We didn’t have anything out of the ordinary,” he said. “We had some areas where we’ve had some drains that weren’t flowing good, and our guys are out there going street by street. They’re hitting all of the ‘hot spots’ — areas that we pretty much believe are going to have a problem when we have torrential rains.”

Mayfield said he was watching the Kings community. The area has a severe drainage problem with runoff from the bluffs on the east side of North Washington Street crossing and covering the street with sand and dirt.

He said the city it trying to clear drainage culverts under the street that become clogged with dirt and sand during heavy or extended periods of rain.