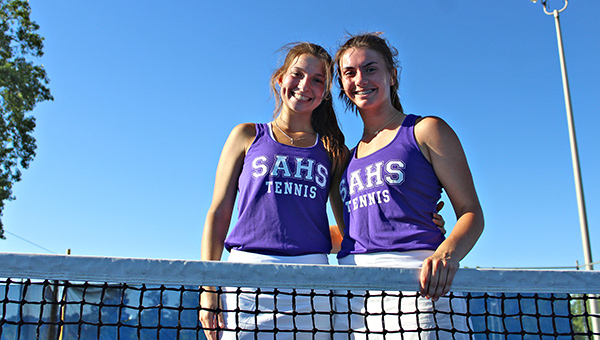 For five rain-filled days, Ashley Jarratt and Taylor Chewning got to think about what was coming.

As the sun broke through the clouds at last and beat down on the courts at Halls Ferry Park, they put it all into practice and turned it into reality.

Jarratt and Chewning rallied to win the last six games of the second set after dropping the first three, and beat Park Place Christian Academy’s Maggie and Reagan Savell 6-4, 6-3 to claim the MAIS Class AAA No. 1 girls doubles championship on Monday afternoon.

It’s the third consecutive doubles title for the pair of sophomores — the first two were at the No. 2 position — and capped a four-year run in which they’ve gone 68-13 and reached the state championship match four times.

“It’s a good feeling. It’s our first year as doubles-one. We didn’t really change anything, it’s just the competition got much harder so we had to play up to the standards,” Chewning said.

The delayed doubles final was the last match of the MAIS Class AAA state tournament. The rest of it was played last Wednesday, but rain and thunderstorms forced this match to be postponed until Monday.

Despite the delay — or perhaps because of it — a festive crowd built throughout the match. Nearly 100 people were watching by the end, cheering on every point. The two doubles teams were the only ones on the court, which added to the big match atmosphere.

So did the history between the teams. This was the fourth time Jarratt and Chewning have played the Savell sisters this season. The Park Place team won in the regular season and District 3-AAA tournament, while the St. Al duo won in the Class AAA South State tournament on May 1.

“It’s really different, because normally every time we would play them we wouldn’t play them first. We’d play them in the finals,” Jarratt said. “This time we didn’t get a warm up match before it. We had to go right into it, which is sometimes hard.”

Although the match was decided in straight sets, it was far from one-sided.
Jarratt and Chewning broke the Savells twice in the first set and didn’t gain control until winning the last two games and the set. Park Place then took command early in the second, using a more aggressive and hard-hitting approach to go up 3-0.

At that point, Jarratt said, she and Chewning drew on their long history with the Savells to find a rallying point.

“We had played them four times, and in another match the same thing happened. We got ahead and they came back. So we knew we could get back ahead,” Jarratt said.

Jarratt and Chewning held serve twice and won a break point in between to tie the set at 3-3, and the match seemed to be decided in the pivotal seventh game. The two teams played four deuce points before Chewning finally ripped a winner down the middle for yet another break point.

The St. Al tandem then won the next two games, taking match point when a Park Place shot went long and wide, to clinch the title.

“You’ve got to stay calm and confident and push through it, and take each game and each point step by step. Every single point is a new point. They started off strong but we got back in it. They’re really good competition. We’re evenly matched,” Chewning said. “We just fought a little harder and got a little more aggressive. We took advantage of the shots we had to. We let up once we had that one under our belt. They got ahead, but then we knew we had to finish it.”

The match might also have marked the end of their doubles partnership. Both players will return next season, but they might be split up to play singles instead of doubles. Jarratt and Chewning have gone 43-4 against MAIS competition in their four years together. One loss was in the 2016 No. 2 doubles championship match and two others were this season against the Savell sisters.

Jarratt said it was a great way to wrap up an era if it was indeed their final match together.