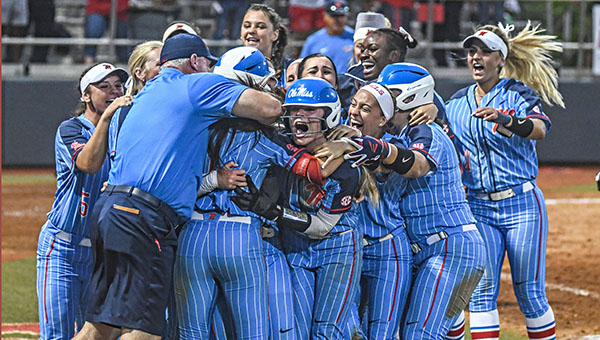 Ole Miss softball players and coaches celebrate their win over Louisiana-Lafayette in the NCAA Tournament’s Oxford Regional on Sunday. Ole Miss won 5-4 to advance to the super regional round against Arizona. (Bruce Newman/The Oxford Eagle)

OXFORD — With a little bit of drama and a whole lot of flair, the Ole Miss softball team left the field feeling pretty dang super on Sunday.

Ole Miss (41-18) advanced to the super regional round for the second time in three seasons. It will head west to play Arizona in a best-of-three series beginning Friday.

“What a day for us. We had our backs against the wall and this team stepped up. I don’t think I’ve ever been more proud of a team,” Ole Miss coach Mike Smith said. “We just had a never-say-die attitude. We felt disappointed after our loss (Saturday) and we came back with a vengeance. We knew that we wanted to get to a super regional. I’m happy for this senior class that we get that opportunity to go out to Tucson, Arizona and play.”

Ole Miss fought its way out of the losers’ bracket after losing 2-0 to Louisiana-Lafayette (52-6) on Saturday. The Rebels beat Southeast Missouri State 10-0 later Saturday, and then ULL 5-1 on Sunday to set up a winner-take-all showdown.

Louisiana rallied from a 3-0 deficit early to go up 4-3. Raina O’Neal hit a three-run home run for the Ragin’ Cajuns and Julie Rawls scored the go-ahead run in the sixth inning on a wild pitch.

Then, in the bottom of the seventh, it was Ole Miss’ turn for a comeback. Mikayla Allee led off with a double and Kylan Becker followed with a single. Autumn Gillespie brought in the tying run with a squeeze bunt and Gabby Alvarez reached on another bunt.

Finally, with one out and the bases loaded, Kaylee Horton hit a high-bouncing grounder for the walk-off. Becker scored to set off a wild celebration at the Ole Miss Softball Complex.

“I knew my job. I knew I needed to score that run,” Horton said. “Because I knew Kylan was on third and she’s fast, so I was thinking hit the drop-ball and pound it into the ground. And so it worked.”

Now the Rebels will head on to the super regional round for the second time in the program’s history. They were swept by UCLA two years ago, and will likely be underdogs again.

Arizona (45-12) — the No. 6 national seed — rolled through the Tucson Regional on its home field. The Wildcats won all three games, dispatching Harvard once and Auburn twice. They beat Auburn 12-3 in the championship game and have won five of their last six overall.

Ole Miss is the No. 11 national seed. Pitcher Brittany Finney said the Rebels have already proved they can compete with the best, and now they’re set to do it again.

“You know, when the 11 seed came out I finally felt like (the selection committee) finally gave us something we earned. We earned absolutely every bit of that. We worked so hard, we’ve proven multiple games throughout the season that we can compete with almost anybody,” Finney said. “And then everybody came out and said all these negative things about it and I was kind of like, Whoa.’ That’s not how I expected anybody to react. Coming out and losing in the series early I think a lot of people were kind of like, ‘Ha ha. I told you so.’ I think we finally got the last laugh.”