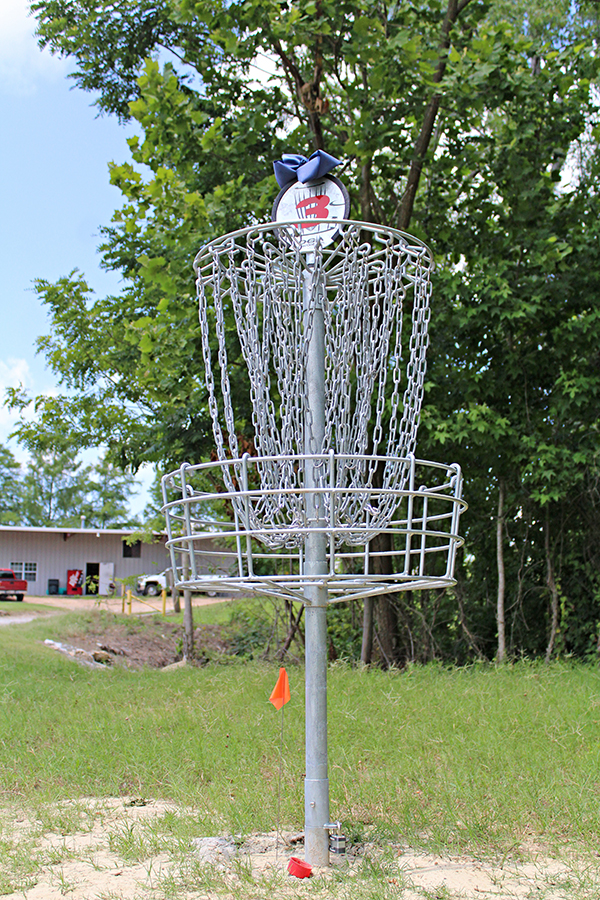 A disc golf target stands at Halls Ferry Park. A new nine-hole disc golf course was built in a partnership with the City of Vicksburg’s Parks and Recreation Department and Leadership Vicksburg, and will open with a free clinic on Saturday morning. (Ernest Bowker/The Vicksburg Post)

In recent weeks a string of mysterious 5-foot tall metal totem poles have appeared at Halls Ferry Park, ringed with chains and topped with numbers.

The structures are not the work of some odd cult, but rather the city’s parks and recreation maintenance crews, and are Vicksburg’s newest recreational offering.

The baskets are the holes for a new nine-hole disc golf course that will have its unofficial opening on Saturday morning when Leadership Vicksburg hosts a clinic at Halls Ferry Park.

The course was plotted and built as a project by Leadership Vicksburg, in cooperation with the City of Vicksburg’s parks and recreation department.

“We brainstormed on what project we were going to do, and one of the young adults in the group said people his age need something to do,” said Anna Booth, a member of this year’s Leadership Vicksburg class. “He threw out the idea of disc golf, and I had heard through the grapevine that the city was talking about the idea of a disc golf course. So we said, ‘Why don’t we work together?’”

Disc golf is best described as golf played with frisbees, although many players actually use specialized plastic discs that are heavier and smaller than frisbees. There are different discs designed for longer flight (drivers) and shorter throws (putters), as well as discs for other situations.

Just like in regular golf, the object of the game is to go from tee to target — those metal baskets with chains designed to catch the discs — in as few throws as possible. Holes are spaced a couple hundred feet to several hundred yards apart. The longest hole on the Halls Ferry course is about 250 yards.

According to the Professional Disc Golf Association, there are nearly 6,000 courses in the United States, and the sport is growing. Thanks to its low cost — specialized discs cost less than $15, the sport can be played with any frisbee that costs far less, and the holes can be built and installed for a few hundred dollars apiece — it’s a popular feature in many city parks.

Rick Daughtry, the director of maintenance for the Parks and Recreation Department, said the equipment for the course cost around $4,700 and his crew handled the actual construction. The course follows the layout of the park’s terrain and involved only minor work to build.

The course is open to the public and free to use.

“We needed something out here besides baseball, softball and the walking track, and we’ve got the property to do it,” Daughtry said. “Anybody can come play. It’s free, it’s here, and it’s good exercise. It’s not a flat course.”

Vicksburg’s course is a work in progress. There is still work being done to improve its flow and design. On Wednesday, for example, Daughtry said he was cutting grass to form a fairway that would help golfers follow the layout. The baskets themselves are portable and can be moved to several different anchor locations to change things up from time to time.

Concrete tee boxes measuring 4 by 12 feet will be installed later. Daughtry said he’s waiting to get input from players on how the course plays and what adjustments need to be made before pouring concrete.

The course is also only half finished. There are plans to put nine more holes on the south side of the park. Daughtry said those will go through the woods, so he’s waiting until the foliage thins out in the fall to clear brush and install the baskets. The back nine is expected to be ready in early 2020.

Once completed, Daughtry said, the course will be able to host tournaments sanctioned by the Professional Disc Golf Association.

“Some tournaments get between 50 and 150 people, so that’s something that could have an economic impact for Vicksburg,” Daughtry said.

A formal ribbon cutting will come at a later date, but Saturday’s clinic will serve as an unofficial grand opening.

The clinic will run from 8 a.m. to noon at Halls Ferry Park and will focus on the basics of the game such as rules, course etiquette and safety.

Other activities will also run alongside the clinic. A dunk tank will be set up on Halls Ferry Park’s Babe Ruth baseball field with local dignitaries taking their turn on the stool. Raffle tickets will be sold, three for $5, for the chance to win a gift basket from the Vicksburg Chamber of Commerce, and food will be available as well.

The disc golf clinic is free, but there is a small charge for some of the activities. All proceeds benefit the United Way of West Central Mississippi.

DISC GOLF CLINIC
• Saturday, 8 a.m. to noon
• At Halls Ferry Park
• A free disc golf clinic will be held Saturday to mark the opening of a new course at Halls Ferry Park. The clinic will include lessons on rules and etiquette of the game. Other activities including a raffle, dunk booth and food will also be available. The clinic is free, but there is a small charge for the other activities. Proceeds benefit the United Way of West Central Mississippi.