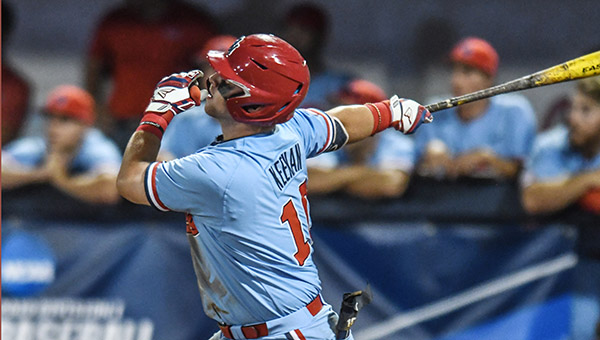 Ole Miss (38-25) broke the game open with a five-run fifth inning that extended its lead to 10-1. Servideo’s two-run homer, which was just his second of the year, capped the frame.

As much as they were hitting for power, Ole Miss was getting everything to work offensively. The three Rebel homers accounted for just six of their runs, yet every starter reached base and nine different players recorded a at least one hit.

“As much as coaches speak and we talk about quality at bats and grinding it out getting base hits, everyone likes home runs,” Ole Miss coach Mike Bianco said.

Keenan left Saturday’s SEC Tournament semifinal game with severe dehydration, and Sunday’s championship game after suffering a shoulder injury. To be back healthy, and contributing in a big way, was huge for the Rebels. He finished 2-for-4 with two RBIs.

“I felt great. I knew I was going to play in the game. There’s no way I was going to miss it,” Keenan said. “That ball off the bat felt really good.”

Ethridge (7-6) gave up a run in the first inning, but cruised after that as the Rebels built a big lead. The 6-foot-5 right-hander gave up two runs on three hits and retired 20 straight batters at one point. He struck out three.

“Will was terrific tonight, maybe as good as he’s been all year,” Bianco said. “Just sensational by him, and of course the offense continued to add.”

Jacksonville State (37-22) was hurt by two errors, including one during the Rebels’ five-run fifth. Garrett Farmer (5-2) gave up 10 runs, including five earned, over 4 2/3 innings. He walked four and struck out six.

Next up for Ole Miss is Clemson. The Tigers beat Illinois 8-4 earlier on Friday to start the Oxford Regional.

Illinois and Jacksonville State will play an elimination game at noon.