Anderson pushes through to the gold 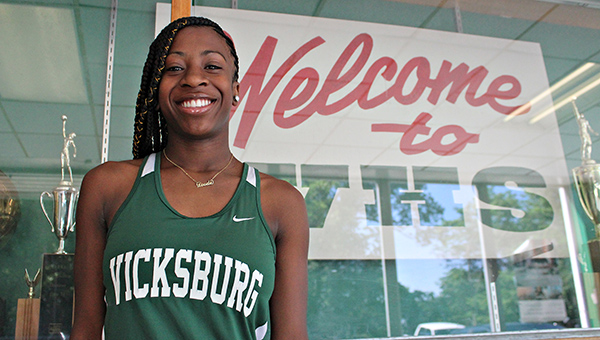 Vicksburg High sprinter Char’Davia Anderson is the 2019 Vicksburg Post girls Track and Field Athlete of the Year. She won the MHSAA Class 5A championship in the 300 meter hurdles, finished second in the 100 hurdles, and also competed on two relay teams that reached the state meet. (Ernest Bowker/The Vicksburg Post)

There was a point in Char’Davia Anderson’s high school track career where she wanted to quit the sport.

Unhappy running an event she didn’t care for, Anderson went to Vicksburg High coach Deatra Cable-Robinson and told her what she wanted. Cable-Robinson talked her into staying, and both of them wound up happy with how it worked out.

Anderson won the Class 5A championship in the girls 300 meter hurdles this season at the MHSAA state meet, and added a runner-up finish in the 100 meter hurdles. They were her first medals in four trips to the state meet, and not only gave her a happy ending to her high school career but made her The Vicksburg Post’s female track and field Athlete of the Year as well.

“It feels great. I’ve been working on this since eighth grade,” Anderson said. “It feels awesome. I know I worked for this. I worked very hard for it.”

Three years ago, Anderson was one of Vicksburg’s best runners in the 400 meter dash. She finished fifth at the Class 5A state meet as a freshman and has been on the 4×400 meter relay team for four years. The relay team reached the state meet this season.

The only problem is, she hates the event.

“I really wasn’t expecting to continue track, but I knew my coaches saw something in me so I kept going. Tenth-grade year I had to keep repeating the 400 and I wanted to stop. I actually did quit, but Coach Cable told me I couldn’t quit,” Anderson said. “I was really good at it and I had ran a 57 (seconds). I made it to state and had a good time and she told me you’re going to keep doing this.”

So Anderson did keep going, with splendid results. She qualified for the 100 meter hurdles in both the 2017 and 2018 state meets, but finished fourth and sixth, respectively.

Finally, this year, she broke through. After fighting through an illness to finish second at the North State meet in the 300 hurdles and qualify for state, Anderson had a great day in Pearl.

Anderson was edged out by Laurel’s Ashlyn Jones for the 100 meter hurdles crown, but then aced the 300. She clocked a time of 45.53 seconds, just .02 seconds better than West Jones’ Brikayla Gray, to win her first state championship. Anderson’s time at the state meet was nearly three seconds better than the week before at North State.

“It was really tiring. That’s my weakest race, and to get first place it felt real good,” Anderson said of winning the 300. “I wasn’t expecting to win it, because I felt my body breaking down. I was so tired. I got the strength somewhere.”