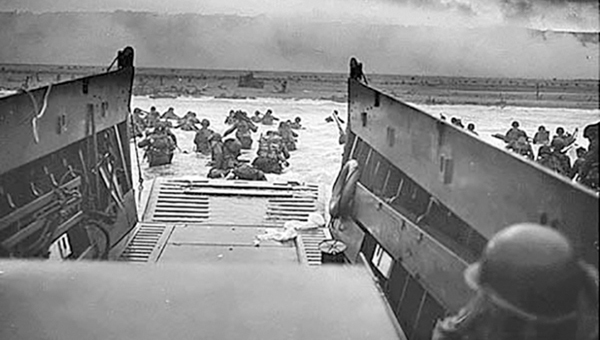 American troops leave a Higgins Boat and wade ashore in the early hours of the D-Day invasion on June 6, 1944. (U.S. Army)

WITH AMERICAN FORCES IN FRANCE (AP) — This story was first published on June 8, 1944, after AP journalist Don Whitehead, who became known by his colleagues as “Beachhead Don,” landed on Omaha Beach in Normandy on D-Day with the 1st Infantry Division. His story was delayed by more than a day as the Army’s communication system for the war correspondents broke down, and journalists weren’t able to get the news out for more than 28 hours. The AP is republishing Whitehead’s original report to mark the 75th anniversary of the assault that began the liberation of France and Europe from German occupation, leading to the end World War II.

Fighting as American troops did in Tunisia, Sicily and Italy, doughboys have smashed through the outer crust of Hitler’s fortress in a gallant display of courage and skill.

Never before has an army attempted to land such vast numbers of men and materials in such a short time, but the job is being done after a shaky start.

When we landed behind the assault troops the enemy still was pouring a heavy machine-gun mortar and artillery fire into the boats as they drove ashore and had our troops pinned behind a gravel bank just above the water’s edge.

Troops, supplies and vehicles began to pile up on the beach at an alarming rate. The enemy controlled the exits with accurate fire and the time schedule was being disrupted.

One unforeseen difficulty here was that three fresh regiments of German infantry moved onto the beach area just before the landing for anti-invasion maneuvers. They were sitting in their positions when the armada arrived offshore.

But under the urging of a soft-spoken brigadier general the organized enemy positions were silenced and the great surge inland began.

In the matter of a few hours the engineers had roads built from the beach and heavy equipment was pouring across.

Along the beaches were underwater barriers, barbed wire, emplacements, concrete houses with 88-mm. guns covering the beach approaches. The walls of houses were of reinforced concrete four to six feet thick,

Two hundred yards from the beach on the side of a steep bank the Germans had built one strong-point and had another under construction. This blockhouse was about 15 feet square with one opening through which was poked the snout of an 88-mm. gun.

Behind the thick walls were cases of ammunition, Behind the blockhouse the gun crew had tunneled into the side of the hill and installed living quarters.

Two young Germans were supposed to man the weapon but they were in quarters when the naval bombardment began and a shell ripped squarely through the gun port.

They ran out of their tunnel and hid under a bridge where Lieut. Carl W. Oelze, Cleveland, found them and took them prisoner. One was 17 years old and the other 18 and both said they were glad the invasion had come and that they were prisoners as they did not want to fight anyway.

On the other side of the draw was a similar position and further inland above the exit from the beach was another concrete blockhouse with its 88-gun pointing down the approach.

The prisoners coming back to the rear looked rather small and scrawny. They looked with wonder at the bigger and stronger American boys and their fine equipment.

During the night German snipers infiltrated our lines and made life uncomfortable. The troops were wet from wading through the surf and the bedding of most troops was lost in vehicles swamped on the beach.

Big guns of our warships are standing offshore and belching flame and smoke. Small craft are shuttling troops and guns to the strip of beach. Big bulldozers are gouging out a road.

Along the beach are still the khaki-clad bodies of boys who gave their lives in the United Nations bid to crush German’s armed might. But there were not so many as I had expected to see, and I patrolled this strip from end to end.

Canadians reported that German parachute troops were being dropped on a small scale behind Allied lines.

In my books much credit goes to the tall lean brigadier general who showed absolute disregard for his own safety in organizing his troops and getting them moving inland.

I cannot name him. But I can name the cool calm lieutenant who stayed by his side during the whole time. He was Robert J. Riekse of Battle Creek, Mich.

Eight hours after landing, not a single enemy plane made an appearance over our beach.

We had waded ashore to the rattle of machine guns and the bursting of shells.

A soldier riding on the rear of a “duck” at the water edge behind me suddenly gave a startled cry and toppled into the water. A medic dragged him to the beach and treated a wound in his thigh.

Wounded men, drenched by cold water, lay in gravel, some with water washing over their legs, shivering and waiting for stretcher bearers to take them aboard returning small craft.

“Oh, God, let me aboard a boat,” whimpered one youth in semi-delirium. Near him a shivering youth dug with bare fingers into gravel.

Shells Burst all Around

Shells burst on all sides of us, some so close they threw black water and dirt over us in showers. They smacked into water around the boats, but in all the shelling I saw only one boat hit and she pulled out under her own power.

A runner came from an advance unit bearing a message for the general. He was John P. Foley, Trenton, N.J.

Although nicked by a bullet over one eye, Foley came through enemy fire to carry an important message which resulted in the general sending reinforcements to a certain sector.

Then the general began working to get troops off the beach. It was jammed with men and vehicles. He sent a group to the right flank to help clean out the enemy firing directly on the beach. Quietly he talked to the men, suggesting the next move.

The Army’s communication system for correspondents accompanying American troops broke down completely and for more than 28 hours we were unable to get news out. The public relations officer brought a radio ashore early among the assault waves, but it was put aboard a jeep which he was unable to find until the next day.

There was supposed to be a system of couriers to take correspondents’ dispatches from the beach to ships, but there were no couriers.

My first article was handed to a litter bearer who said he would try to get it to a control ship which has a courier service.

We were even more bitterly disappointed when we turned on the radio and heard a B.B.C. report from British correspondents accompanying British troops. Their communications apparently functioned well.