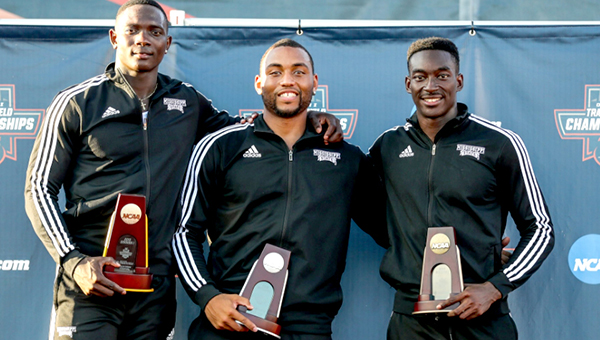 AUSTIN, Texas – Mississippi State made history on Wednesday at the NCAA Outdoor Track and Field Championships. Sophomore Anderson Peters defended his national title in the javelin while leading his teammates to the first sweep of the podium since 1964.

State’s trio is just the 11th sweep of any event podium in NCAA history. The most recent came in 2015, when Oregon claimed the podium in the men’s 1500m.

The Ducks’ 1964 squad is the only other trio to do so in the men’s javelin, and that was before the implement was changed in 1986.

Mississippi State has now won the national title in the event in three of the last four years.

“That puts Mississippi State on the board, most importantly,” throws coach April Thomas said. “It couldn’t have happened to a better group of guys, honestly. These guys work hard every day. They feed off each other, so it makes my job a lot easier. They’re so good sometimes they don’t need my help.”

Along the way, Peters became just the third MSU athlete to claim consecutive national championships. He threw a personal-best 86.62 meters, breaking his own school, meet and national records.

The 2016 national champion threw 78.43 meters to finish second. Freshman Tyriq Horsford started off slowly with a foul and a 70.97 meters throw on his first two attempts. Sitting in sixth place, he vaulted to the bronze-medal position on his third attempt, with a mark of 75.59 meters.

“As far as the javelin’s concerned, we were perfect,” interim head coach Chris Woods said. “We maximized the amount of points we could get in that event. That’s a great way to start the meet off. Putting 24 points up at a national championship isn’t easy to do. There will be several teams here that don’t do that as a team, and we did it in one event group.

“I’ve been on record several times saying I think April Thomas is one of the best throws coaches in the country,” Woods continued. “I’m proud and happy for her that she’s able to experience this. There’s very few coaches in the history of NCAA track and field that are able to sweep a podium. Being a strong female in a male-dominated area, I think it shows how special she is as a coach. I’m just lucky that she’s on my team.”