Barry dumps rain, fizzles as it passes through Warren County 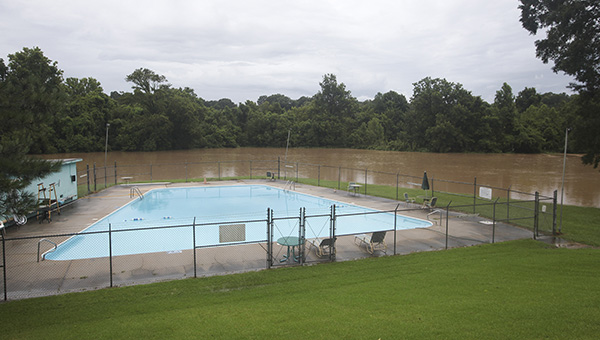 Barry should soon be a memory.

The storm that arrived on the Louisiana coast as a Category 1 hurricane on Saturday delivered heavy rains and high winds to portions of Louisiana, Mississippi and Alabama as it made its way north to Arkansas and Missouri on Monday.

The storm was predicted to dump from 6 to 10 inches of rain on Warren County and bring tropical storm force winds and the possibilities of flooding and tornadoes. Warren County Emergency Management Director John Elfer said it did bring 4 to 7 inches of rain in some locations in the county, and winds that were below tropical storm force strength of 39 mph. The National Weather Service reported the strongest winds in the area were 21 mph at the Vicksburg Tallulah Regional Airport.

Some lingering rain is still in the forecast for Tuesday.

“We were very fortunate that it was not as severe has had been predicted,” Elfer told the Board of Mayor and Aldermen at its Monday meeting. “We did receive between  4 to 7 inches of rain, depending on what part of the county or the city you were in.”

Elfer, along with Deputy Police Chief Bobby Stewart and Fire Chief Craig Danczyk gave the board an update on the effects of the storm.

“The major effects of the storm occurred this morning after about 3 a.m., when we had a tremendous amount of rain fall on top of the 3 inches we has already received and had a number of city streets that had minor flooding, some trees down in addition to the backwater flooding we already had,” Elfer said.

Stewart said police worked six weather-related wrecks, one of which involved minor injuries. That number included a Saturday camper fire on Interstate 20 that blocked westbound traffic for about one hour.

Danczyk said firefighters and paramedics responded to wrecks in the city and the county.

In other weather related matters:

4More than 700 Entergy customers were without power Monday, including 375 in the Mississippi 27 area, after a tree fell on a power line. Entergy customer service representative Shelia McKinnis said all power had been restored by mid-afternoon Monday.

4A tree fell on an eastbound 2012 Nissan Sentra on Interstate 20 about 5 a.m. Monday, according to information from the Mississippi Highway Patrol. The incident occurred at the 7-mile marker on I-20. The driver was not hurt, and the tree was cleared by Mississippi Department of Transportation crews.

4A Vicksburg teenager was injured in a one-car wreck on Fisher Ferry Road about 7:40 p.m. Sunday.

Warren County Sheriff Martin Pace said Maiya Wilson, 18, was southbound on Fisher Ferry Road when the 2002 Nissan Altima she was driving went off the left side of the road, clipped a utility guy wire and went down a ravine.

Fisher Ferry and Vicksburg firefighters removed her from the car and she was taken to Merit Health River Region for treatment.

4The Vicksburg National Military Park was closed to the public Saturday, Sunday and Monday because of the weather. It will have a delayed opening on Tuesday.

“What we are going to do Tuesday is go in and assess the park and remove any trees blocking the road, and then we will open the park,” Park Superintendent Bill Justice said.

He said when park officials entered the park Monday, they found some trees had fallen and other trees were falling because of the rain and the soft, moist ground.