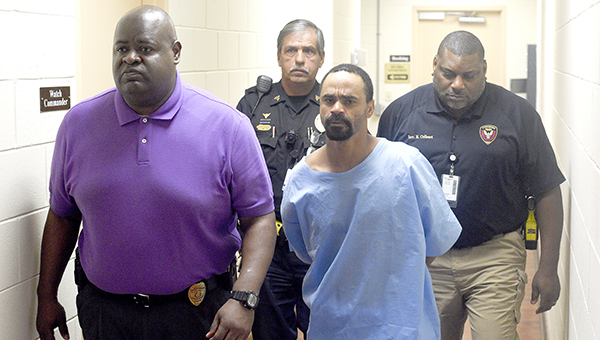 Andre Durant Walker, 38, 408 West Jackson St., Farmerville, La., charged with armed robbery for his robbery of Quick Mart Tuesday is now connected to the death of his girlfriend in Louisiana. (Courtland Wells | The Vicksburg Post)

A Farmerville, La., man is being held in the Warren County Jail awaiting extradition to Union Parish, La., where he faces a charge of second degree murder.

Union Parish Sheriff Dusty Gates said a warrant was issued for Andre Durant Walker, 38, charging him with second-degree murder in the death of his 35-year-old girlfriend, Marie Sanchez Cardin of Bernice, La.

Walker is charged in Vicksburg with armed robbery and possession of a firearm by a convicted felon in the Tuesday morning robbery of Quick Mart, 3600 Washington St. Municipal Judge Penny Lawson set his bond at $1 million at an initial appearance Wednesday morning.

Gates said Walker told Vicksburg officers about killing Cardin during questioning about the robbery, adding her body was found at Walker’s home in Farmerville Tuesday. She had been reported missing Sunday.

Gates said once Walker waives extradition, he will be picked up by Union Parish deputies and returned to Farmerville.

Walker is accused of entering the Quick Mart at 7:29 a.m. Tuesday, brandishing a handgun and demanding money. He reportedly took an undisclosed amount of money from the cash register and fled on foot.

Walker was arrested shortly before 1 p.m. at the Greyhound Bus Station on South Frontage Road and faced charges of armed robbery and possession of a firearm by a convicted felon.