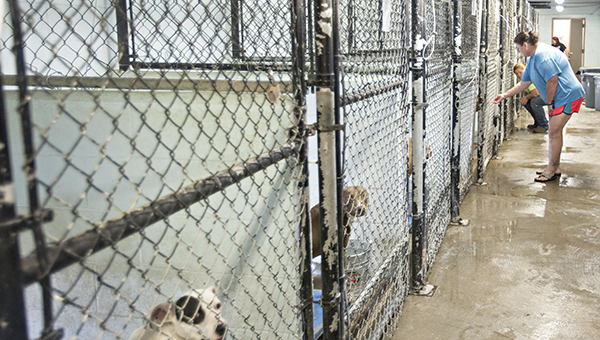 City officials will be looking for a new site to build an animal shelter.

“We are going to make building a new animal shelter a priority,” Mayor George Flaggs Jr. said during a break in city budget meetings Monday.

The Board of Mayor and Aldermen is expected to complete its meetings with city department heads Tuesday as it works to develop a projected estimated $29 million fiscal 2020 budget with employee pay raises anticipated to cost $564,000.

The shelter is presently located on Old Mill Road near the Vicksburg Fire Department’s training center. Lindsey said the building, which was flooded in the 2011 spring Mississippi River flood, was threatened during the recent flood.

“When we get a hard rain, the building floods,” she said. “We have to put up sandbags.”

Last year, the board approved $50,000 to expand the animal control shelter, but the money was never used.

The mayor recommended moving the $1.5 million requested for the project to the city’s capital improvements bond account to protect it from other use.

“I think we need to start looking at this seriously so it won’t be long,” he said. “We’ve got to start moving toward that. We’ve got to find another location and a good building, so let’s put that on the calendar and go on and look at some sites, and see how we can upgrade and move at the same time.”

In other budget matters:

4The board denied a budget request from street department superintendent Skipper Whittington to purchase four new pumps to replace old pumps on the floodwall at Clay Street, Depot Street and the old Anderson-Tully mill site.

He said the city was renting four pumps at a rate of $4,800 a month to help pump water from the area during flooding.

Flaggs and South Ward Aldermen Alex Monsour said renting the pumps was cheaper than buying four new pumps at $55,890 each, or $223,560.

4Traffic supervisor W.L. Sanders requested a portable traffic light to be used when a traffic signal goes out, and $75,000 to purchase 25 new traffic controllers, which are used to work the signal lights. The controllers are $3,000 each.

Presently, he said, he has 35 broken controllers at his office and 25 now working with traffic lights.

“If something happens to one of them, I can’t go in and make any changes to it because they’re obsolete; you cannot buy parts for them, you cannot get them replaced,” he said.

Sanders also requested upgrading traffic signals to a “mast arm intersection” system that uses a metal arm rather than cables to hold the traffic signals. The wiring is in the arm.

“I think we all saw in this last storm what happens when we have cables,” he said.