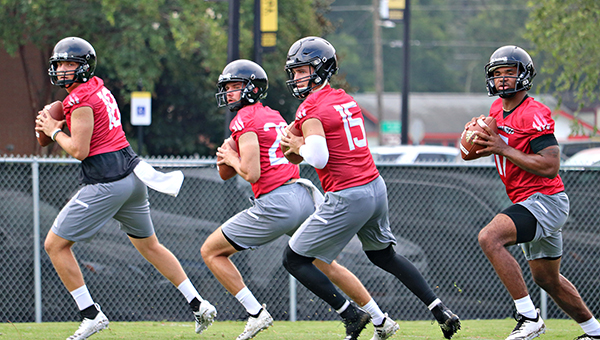 HATTIESBURG — A small action can put into motion things that can produce much larger or even momentous outcomes.

That happened at the Joe P. Park Practice Facility Friday morning with the simple act of a blown whistle.

That solitary whistle prompted all 110 Southern Miss football players to their respective places for stretch. When the song “Spirit in the Sky” by Norman Greenbaum started blaring over the speaker, just like it has done at the start of every workout of the first three years under head coach Jay Hopson, practice and the sense of something bigger in the works began for the Golden Eagle football team with the opening of fall camp.

Under overcast skies that kept the temperature down to a reasonable level on this early August day, the Golden Eagles went through a 2 hour, 45 minute practice in shorts and helmets and it did not look like the squad had missed a beat since the end of spring training. Hopson’s message following the team’s first practice was simple.

“Our constant point to the guys right now is to get better from day one to day two, from day two to day three and so on,” Hopson said. “There was decent retention (from the spring and summer) and we just have to keep building.”

Hopson also stressed that the team’s depth was much better than it has been at the start of his previous three seasons that include three winning campaigns and two bowl games.

Southern Miss finished 6-5 last season, but was snubbed for a bowl bid. A total of 48 letterwinners, including nine starters on offense and six on defense, are returning.

Over the next 21 days, the Golden Eagles will go through position various position battles as well as see the team become more cohesive as they get ready for the program’s 103rd season opener against Alcorn State on Aug. 31 at M.M. Roberts Stadium.

“You look out there (today) and you see a deeper football team this fall, from what we inherited (when I got here) and what we tried to build out from there,” Hopson said. “Naturally there are a lot more players because we have 15 more scholarship players running around out there (today).”