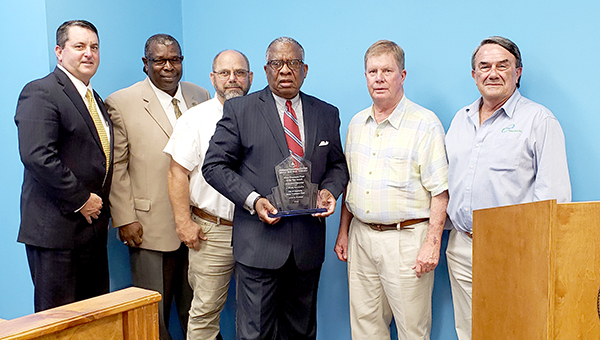 Vicksburg has the best water treatment plant in Mississippi, according to the American Water Works Association.

North Ward Alderman Michael Mayfield announced the designation at Thursday’s meeting of the Board of Mayor and Aldermen, adding the city received an award for the accomplishment during a conference of the Alabama/Mississippi Section of the AWWA in Mobile, Ala.

After talking with representatives from other cities about water and wastewater treatment problems, Mayfield said, “I didn’t realized how blessed we are.”

He said ESG, the company hired in 2016 to manage and operate the city’s water treatment plant on Haining Road, and city utilities workers “do a great job in what they do for the city of Vicksburg. You all have done a heck of a job.”

Eddie Busby, ESG project manager for Vicksburg, said the plant had to meet several criteria to win including:

• Performance: Overall water quality and no violations with regulatory agencies.

• Operational record keeping and regulatory compliance: 100 percent compliance with all regulatory agencies, including a five-star rating from the state Department of Health for the past three years. Busby said the city voluntarily tests the water at the public schools for lead and copper.

• Milestones: Upgrades to the facilities.

“It was pretty humbling,” Busby said of the award, adding it was because of the work of ESG and city employees.

The award, Mayor George Flaggs Jr. said after the meeting, “Speaks volumes for the service that ESG provides and for us making the decision to contract it (water treatment) out. It reiterates that we’re heading in the right direction.”

Mayfield said it was amazing to him the problems other cities were having over water quality issues.

“We’re very fortunate. You don’t receive that plaque unless you’re the best. That tells me a whole lot about who’s operating our plant,” he said. “We’re grateful to them that they’re on top of it. That’s helped us.”