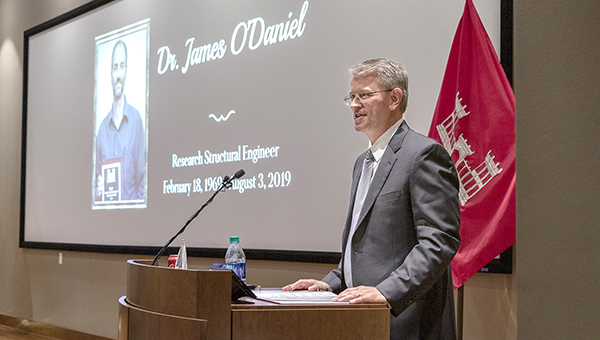 ERDC and U.S. Army Corps of Engineers coins, a can of Coca-Cola, and a glass sailboat.

ERDC said goodbye to one of its own Thursday, honoring a man who was known as an expert in his field, a friend and mentor who loved his work, cycling, sailing, Penn State football, the Boston Red Sox, and hated socks.

ERDC engineer Dr. Jim O’Daniel died Aug. 3 from injuries received in a collision with a pickup truck as he rode his bicycle during the annual Bikes, Blues & Bayous bike ride in Leflore County. Thursday afternoon, his friends and co-workers gathered to pay their final respects and remember his life.

“Jim loved his family; he often said he may have had a Ph.D., but his favorite title was ‘Uncle Jim,’” ERDC Director Dr. David Pittman said. “I know Jim was much more than a co-worker to us. This past weekend, we lost a great colleague, a great friend and a great engineer.”

Pittman looked across the auditorium at the collection of cyclists and sailors who participated in cycling and sailing events, adding, “Your attendance here speaks volumes” for O’Daniel’s character and his friends outside of ERDC.

O’Daniel, he said, was a top expert in his field. “He was a world class talent with a world class heart. Jim was passionate about his job.”

ERDC commander Col. Ivan Beckman called O’Daniel “an inspiration to all of us.”

“Jim never wanted a name on his jersey,” he said. “He worked and played with heart and pride. He did his very best in every single thing he did. He worked for the glory of ERDC. Some people we work with are our cohorts; Jim was my friend.”

Co-worker Bob Brown, said O’Daniel was a mentor to him, who, regardless of how pressed he was for time, “Always had time for me. The more I knew him, the more I trusted his counsel. He helped me become a better engineer, a better researcher and a better person. He was my rock, anchor and my compass.”

Dr. Kent Danielson said O’Daniel “was not perfect, but he was a kind and decent person.”

Pittman said O’Daniel had an impact on so many lives, not only in ERDC, but in the community.

“We at ERDC were privileged to have Jim in our lives for the past 20 years. We will miss him very, very much. Our prayers go to his family, his friends and the entire ERDC team,” he said. “Ride free, Jim; ride free.”

O’Daniel served in ERDC’s Geotechnical and Structures Laboratory, where he performed research and development in the area of computational mechanics for blast, impact and penetration events.