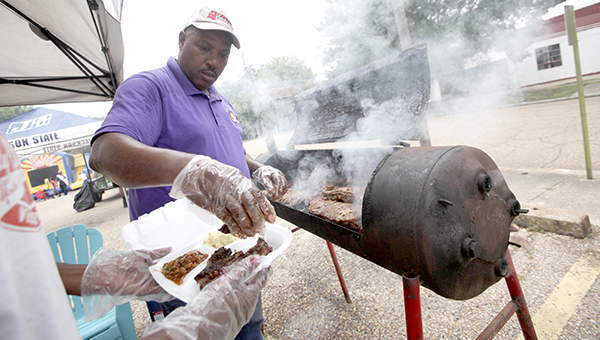 Cooks who think they’ve got what it takes when it comes to barbecue to be head and shoulders above the rest can test their skills next weekend.

The fourth annual Greater Mount Zion Youth BBQ Cook Off Fundraiser and Youth Day is Aug. 17 beginning at 8 a.m. at 907 Farmer St., with a fundraiser for the church’s youth program starting at 11 a.m.

It all began with an idea to find the best griller at Greater Mount Zion Baptist Church.

“We had a deacon’s meeting, and I brought up the idea to have a barbecue cookoff,” said Jesse Trotter, the church’s youth minister. “We all like to cook barbecue, and they said ‘OK,’ and it took off from there.”

Later, he said, the fundraiser for the youth program was added, and the church included bounce houses and free hot dogs and drinks for the younger children. All the proceeds go to fund programs for the church’s youth ministry and outreach programs.

The youth also perform at nursing homes and give the residents “goodie bags.”

The children are also taken on educational trips across the state.

“We try and keep them active,” Trotter said. “What we want to do is make it (the program) a community thing. We want to get more children from the community, because our church is a church that wants to be a community church.”

By providing the bounce houses and food for the children, he said, “We’re trying to bring the kids in and the parents in and get them involved at what we do at the church.”

The fee to compete in the Cook Off is $20. Trophies will be awarded to the top grillers in ribs, baked beans and chicken thighs.

Agencies stand firm, together in fight against terrorism

Local officials and officials with the U.S. Army Corps of Engineers’ divisions in Warren County Monday affirmed a commitment to... read more