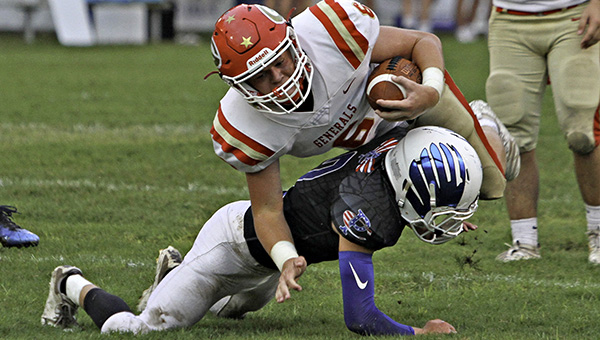 Early in Friday’s game against Newton Academy, Porter’s Chapel Academy showed the kind of offensive firepower it’s been seriously lacking the past two years when Luke Yocum connected with John Michael Wilkerson for an 81-yard touchdown.

Everything else was pretty much a disaster.

The Generals jumped out to a 34-7 lead at the end of the first quarter and never looked back. Other than the long touchdown, there were few highlights for PCA as it fell to 0-2 this season and lost its ninth game in a row overall.

PCA coach Blake Purvis, clearly frustrated, declined comment after the game. His Eagles lost 28-0 to Benton Academy in the opener, but they could at least point to a few things they did well. There was none of that against Newton.

The Eagles had minus-4 rushing yards, and only 4 net passing yards other than the long touchdown. Yocum was 4-for-24 passing for 85 yards and threw two interceptions.

“I don’t have anything nice to say, and I’d rather not say it,” Purvis said.

Hayden Wall also scored a touchdown for Newton (1-0), and Hayze West returned an early interception to set up a touchdown.

Braden Kapp had six tackles for PCA, while Wilkerson also recovered a fumble and had a sack on defense.

PCA will play at Deer Creek Academy next Friday night. The game will be the first of two in a row the Eagles will play against 8-man football teams, with 8-man rules. The game will not count toward the MAIS power points standings.