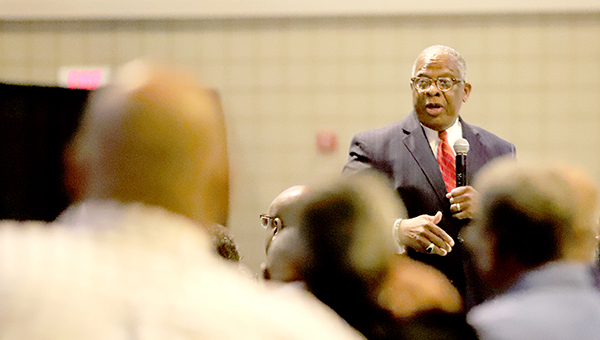 Mayor George Flaggs Jr., along with the other members of the Board of Mayor and Aldermen, want a market analysis of what a new port would mean to Vicksburg. (File Photo)

The Board of Mayor and Aldermen are looking for a firm to perform a marketing analysis for a proposed new port for Vicksburg.

The board Tuesday authorized city clerk Walter Osborne to advertise for proposals from companies to perform the analysis, which is part of a feasibility study to determine whether to build the new port on a site near Vicksburg or expand the existing port facilities.

The board in May approved a contract not to exceed $240,000 with Atlanta, Ga.-based Jacobs Engineering Group Inc. to perform the study, which is funded by $1 million in state funds.

City attorney Nancy Thomas said the contract with Jacobs was to help the city negotiate the process to begin the feasibility study.

The board’s action Tuesday, she said, “Is for the feasibility analysis; to determine if there is a need for the port. They’ll (the selected contractor) look at what’s here, what’s needed, what portion of the market we’re missing out on, and whether it’s feasible to expand or redevelop in order to gain that business.”

The proposed new port is the key item in a $55 million capital improvements program proposed by Flaggs that would be funded by a 1-cent sales tax. About $26.5 million of the money would serve as matching funds for the port, which the Flaggs estimates would be $125 million.

The board is expected to seek a local and private, or special bill, during the 2020 session of the Mississippi Legislature to hold a referendum on the 1-cent tax to fund the program.