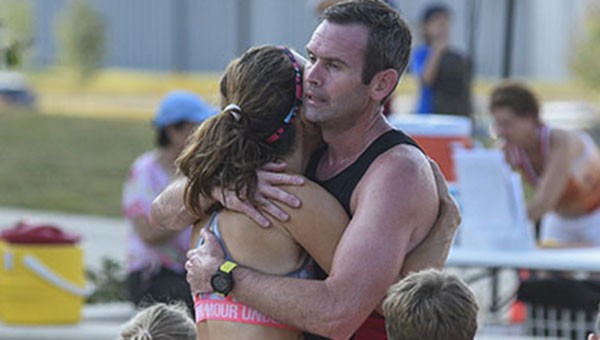 Oliver and Laura Child will soon leave Vicksburg, as their assignment with the U.S. Army Corps of Engineers ends and they are whisked away to somewhere else in the world.

Before they head off, though, the British couple collected a couple more souvenirs from their two-year stay in the River City.

The Childs finished first and second Saturday at the Mad Scientist 5K run at the U.S. Army Corps of Engineers’ Engineer Research and Development Center. Oliver won the overall title with a time of 18 minutes, 33 seconds, while Laura was second and claimed the female championship in 20:01.

The Brits are in the United Kingdom’s military and came to Vicksburg two years ago on a liaison assignment that will end later this year. They said the city’s running community helped them get settled as newcomers and they were thankful for the friends they’ve made here.

Even though there are still two other major running events this year — the Over the River Run and Spooky Sprint 5K in October — going 1-2 on Saturday was a memorable way to wrap things up.

“We’ve done a lot of jobs around the world — Australia, Germany, Belgium, Cyprus — and normally when you move you’re in a military community so you’ve got a ready-made welfare net that picks you up and looks after you and establishes you in the area. When you move here, you don’t have that, and the running community really opened their arms out to us,” Oliver Child said. “It really helped us in the first few weeks that helped us find a house, helped us find a car. All of those things that to an American are very natural, but to a Brit there’s a slight difference. It was the running community that gave us that foundation and has become our friends. When we leave, the thing we’ll miss the most is running in the (Vicksburg National Military) Park with our friends. This sort of tops it off for us.”

The Childs were well ahead of the pack throughout Saturday’s race. The third-place finisher was Ty Wamsley, who was 32 seconds behind Laura Child and two minutes behind Oliver.

Kristi Hall finished fourth overall, and second in the women’s division, with a time of 20:54. Orlando Carrasquillo rounded out the top five in 20:59.

“There’s some very talented college runners that have turned up in the area recently, and to be honest I expected them to be here this morning. So I came here with no expectations,” Oliver Child said. “Last year I started harder than I wanted to, so this year I started more conservative. But really, by the time we came by here I was finding my pace and my rhythm. I was feeling quite comfortable at the halfway.”

In the 5K race walk, Steve Pranger won the overall title and a competitive three-way race with a time of 33:11.

Women’s winner Angel Curry was second overall, in 33:32, and Ron Roma was right behind in third with a time of 33:39. Elizabeth Joyner and Cindy Ables rounded out the top five in 35:41 and 35:50, respectively.

Curry made up some ground to pass Roma for second place in the last mile of the race, but couldn’t catch Pranger for the win.

“Angel always stays with me. She’s my pace person. If I slow down, I know she’s going to catch me,” Pranger said.

A total of 240 people registered for the Mad Scientist 5K, and 229 were scored as finishers. Pranger, who was also the race director, said he was pleased with the turnout.

“Everything came together. It was a little hectic in the morning, but other than that it’s been pretty successful,” Pranger said.