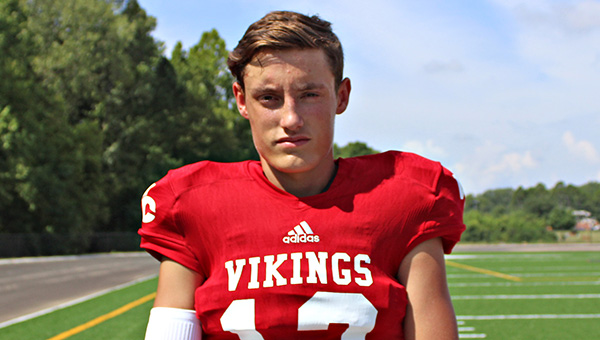 Warren Central quarterback Parker Kivett completed 9 of 13 passes for 230 yards and one touchdown in a 10-9 loss to No. 3 Brandon on Friday.

BRANDON — It came down to the very end for Warren Central — and what a bittersweet end it was.

A bad snap on third-and-11 with less than a minute left went over the head of Warren Central quarterback Parker Kivett. Brandon’s Blake Smith recovered, and the third-ranked Bulldogs held on to win 10-9 on Friday night.

The Vikings will head into their bye week with a 2-2 record, but with a moral victory in their second game in three weeks against a top-5 opponent. They had been blown out by No. 2 Pearl on Aug. 30, and recovered to give Brandon all it could handle.

“Thought it was a good game and proud of the kids for their toughness,” Warren Central coach Josh Morgan said. “Had some things go our way and some that didn’t, but in the end, it was two good football teams fighting to the end.”

Brandon scored its only touchdown of the game off a turnover.

Warren Central threw a lateral pass that was dropped behind the line of scrimmage, and Brandon’s C.J. Blakely scooped and scored from 58 yards out to give the Bulldogs a 7-0 lead with 4:34 left in the first quarter.

“Thought our defense stood up to the challenge tonight on a night where our offense was not clicking,” said Brandon coach Tyler Peterson. “Warren Central is a good football team and a hard nose physical team and you know what style of ball they play and they’re good at doing it. Any win in 6A is a good win.”

Warren Central scored on a 42-yard touchdown pass from Kivett to Kentrick Thompson, but the extra point was missed and Brandon held on to a 7-6 lead with 11:21 left in the second quarter.

On the Vikings’ last drive of the first half they got a 29-yard pass from Kivett to Damond Patton, and a 26-yard run from Malik Sims. Josh Griffin connected on a 27-yard field goal as time expired to give the Vikings a 9-7 lead at halftime.

Brandon (3-1) drove down to the Warren Central 16-yard line early in the fourth quarter, but quarterback Will Rogers was sacked at the 28. Mason Walker kicked a 45-yard field goal with 9:07 left to give the Bulldogs the 10-9 lead.

On the ensuing possession, the Vikings got a 78-yard pass play from Kivett to Antonio Thomas to get into the red zone, but Kivett was sacked by Brandon’s Zihenryon Perry and Nick Griffin’s 40-yard field goal attempt hit the cross bar and bounced off with 5:14 to go.

Griffin had been a perfect 6-for-6 on PATs and 2-for-3 on field goals, including a long of 42, entering the game.

“We’ve got to be better in the red zone. Long pass play that put us in the red zone and didn’t get points and then missed an extra point,” Morgan said. “You can’t do that against a good team. The lateral pass that they scooped and scored was a big difference in the game.”

Kivett ended the night 9-of-13 passing for 230 yards and one touchdown. He had thrown for a total of 274 yards in the Vikings’ first three games.

“Defense stuck to the game plan perfectly and trusted one another,” Morgan said. “We’re coming on as a team and the boys are staying together. We’ve been up and down through the first four games and we know what we’re going into with division play. Try to have a good bye week and we can work on ourselves and get ready to give it all we got.”