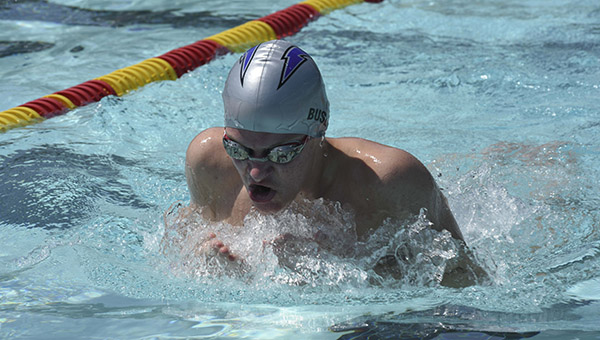 The St. Aloysius Flashes warmed up for their biggest swim meet of the season by winning the one with their name on it.

St. Al bested St. Andrew’s, Warren Central, Murrah and Vicksburg High in the five-team meet. On Wednesday morning the Flashes will head to Flowood for the MAIS Overall Meet.

Martin won the 200-yard individual medley in 2:11.31, and the 100 freestyle in 52.35 seconds. His freestyle time was more than three seconds ahead of runner-up and teammate Spencer Carroll.

Among other Warren County finishers, Warren Central’s Scott Wallace was third in the 200 IM and 100 freestyle, Hayden Jones fifth in the 50 freestyle, and Adan Byrd second in the 100 backstroke.

Vicksburg’s Kameren Batty was fourth out of 43 swimmers in the 50 freestyle.
In the girls’ meet, Emily Cook and Leah Larson each won two individual events to lead St. Al to a second-place team finish behind St. Andrew’s.

Among other Warren County teams in the girls’ meet, Warren Central’s Katie Wallace finished third in the 200 freestyle and the 100 freestyle. Alexis Renne was fourth out of 31 swimmers in the 50 freestyle, and third in the 100 backstroke.