Flashes look to rebound against Riverfield 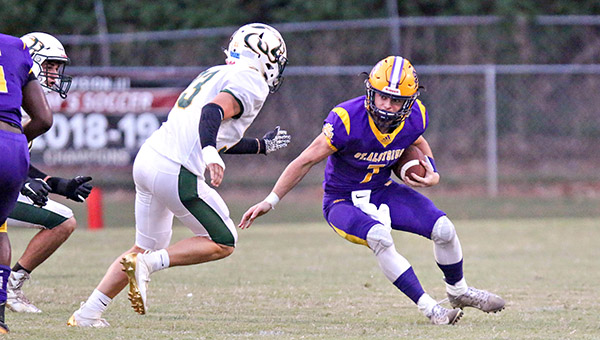 In its first four years in the Mississippi Association of Independent Schools, St. Aloysius’ most important game each season has been the one against Riverfield Academy.

From 2015-18, it was the regular-season finale for both teams and, as such, often held important playoff implications. The three times St. Al beat the Raiders it made the playoffs. The one time it lost, it did not.

The teams were separated during the last round of MAIS realignment, placed not just in different districts but in different classifications. They’re still on each other’s schedule, though, and when they meet Friday night in Rayville, La., it will still be a pivotal game for both teams.

St. Al (2-2) is trying to bounce back from a loss, build momentum for a key three-game stretch against district opponents, and maintain a solid footing in the MAIS Class 5A wild card race. Riverfield (4-0) is looking to remain undefeated after an impressive first month of the season.

“We want to come out on the road, play hard, get better and stay healthy. This is the week we need to start our roll,” St. Al coach Michael Fields said. “What we’re looking at right now is getting as many power points as we can get. We want to be one of the top eight to get a home game. I don’t want to have to travel all the way to Heritage (Academy).”

Riverfield has already matched its win total from last season thanks to a high-powered offense. The Raiders are averaging 48.2 points per game and are one of only two undefeated teams left in Class 4A.

There are 20 upperclassmen on the roster, and Fields said some of Riverfield’s struggles in 2018 were attributable to those players growing into roles they are now thriving in. Riverfield finished 10-2 in 2017.

St. Al won 34-6 when they played each other last season.

“They run the same scheme and have the same coaches. They had a young bunch last year and they’re more seasoned now,” Fields said.

As concerning as facing a quality opponent, Fields said, is the state of his own club. The Flashes had 175 total yards, gave up 420, and lost 35-7 to Class 6A Parklane Academy to end a brief two-game winning streak. Although the score and the stat sheet were lopsided, Fields said he was happy with the effort.

St. Al only trailed 14-0 at halftime, and 21-7 in the fourth quarter, before Parklane pulled away late. A couple of dropped passes and other missed opportunities kept St. Al from making it more of a game.

“The kids played hard. It was 14-0 at halftime and we had two opportunities to score and didn’t,” Fields said. “I took a lot of good out of it. Thirty-five to seven doesn’t indicate how hard the kids played and how the game went.”

Another concern for Fields and the Flashes is keeping together a small roster starting to feel the bumps and bruises of a month’s worth of games. Along with some nagging injuries, the team will be without offensive and defensive lineman Carrington Busari for the rest of the season. The senior has a torn ACL.

Busari had seven tackles on defense and at left tackle was a key blocker for a rushing attack averaging 5.3 yards per carry and 178.3 yards per game.

“On a small club like ours, being a senior tackle and the biggest player we have, it’s like losing six players,” Fields said. “But if you do this long enough, you realize that things like that happen. You just have to power through it and get the job done.”

ONLINE:
For live updates and coverage on Friday night, follow us at vicksburgpost.com, facebook.com/thevicksburgpost, and twitter.com/vixpostsports