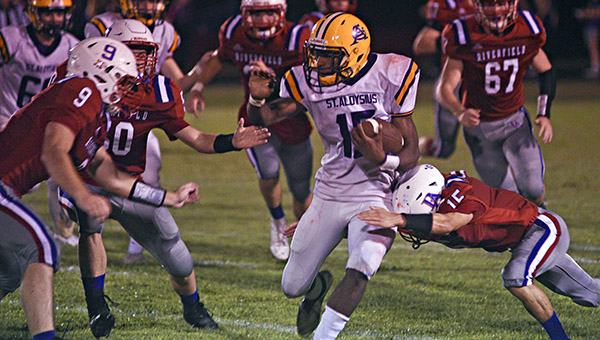 Hardly a drop of rain has fallen on Mississippi and northern Louisiana during the first month of the high school football season. When the skies repeatedly opened up on Friday night, it washed away St. Aloysius’ hopes of victory.

St. Al struggled to hold onto the wet football during frequent downpours, committing eight rain-fueled fumbles that killed drives and blunted momentum. They returned home tired, soaked and disappointed after a 36-15 loss to Riverfield Academy.

“The forecast said they were going to get some rain between 12 and 4, and it was about four hours late. It started raining at 6,” St. Al coach Michael Fields said. “It really hurt us. We were planning on opening it up and throwing it a little more, and we couldn’t do that. Then in the first quarter we had some snaps that were on the ground.”

Alvin Brown scored on a 6-yard run for St. Al (2-3), and Brennan Williams scored on a 48-yard hook-and-lateral play midway through the second quarter. Brown, who was playing quarterback in place of the injured Phillip Upshaw, finished with 111 rushing yards on 23 carries.

Fields said the Flashes were hurt not only by the rain, however, but by Upshaw’s absence. The senior suffered a back injury early in the week that caused him to miss Friday’s game, but he wasn’t ruled out until the middle of the week.

Upshaw’s absence forced the Flashes to shift to a run-first approach with Brown, and the rain and fumbles limited even that.

“It affected us a lot, not having Upshaw at quarterback and time to prepare without him,” Fields said. “We wanted to go in with our passing game and throw it a lot. And then it started raining. It was one of those nights.”

Garrett Brakefield ran for three touchdowns and threw for another for Riverfield (5-0), which scored two touchdowns late in the first half to start pulling away.

The Flashes and Raiders traded touchdowns early, until Baiyln Sorenson caught a touchdown pass from Brakefield with less than four minutes to play. A St. Al fumble near midfield gave Riverfield the ball back and Ty Skeldon capped a quick scoring drive with a touchdown with 28 seconds left to put the Raiders ahead 28-15 at halftime.

The fumble was one of only two St. Al lost in the game. Still, the steady stream of fumbles disrupted an offense that was able to move the ball effectively when it did hang on to it.

“We had a chance to go and be up at halftime and instead they go and get another score,” Fields said of the fumble. “That would have been a first down, too, and if nothing else we were going to milk the clock and get the ball back to start the second half.”

St. Al had a couple of chances to get back in the game in the second half. A nearly six-minute drive that included a number of penalties — at one point St. Al faced a second-and-35 from its own 19 because of several holding penalties — ended with a punt. A fourth-quarter drive ended on downs inside the Riverfield 30.

In between, Brakefield ripped off a 68-yard TD run with 16 seconds left in the third quarter and the two-point conversion run by Nicholas Heath gave the Raiders a 36-15 lead.

“It was just being undisciplined and having stupid penalties. Every time we got in scoring position, it hurt us. We had one situation where one of their guys threw a punch and got ejected, and then we opened our mouths and it was offsetting penalties and we didn’t get anything out of it,” Fields said. “It was contagious tonight. When you get some disappointing news during the week, it deflates you a little bit.”

The loss hurt St. Al in the MAIS Class 5A wild card race, but did not affect its District 3-5A championship hopes. The Flashes host Copiah Academy next week to begin a stretch of three consecutive district games that will determine if they can qualify for the playoffs as a district champion or a wild card.

Either way, they need to regroup and start winning again. Friday’s loss was the Flashes’ second in a row.

“Sometimes those kinds of games are a wake up call,” Fields said. “If you’re a championship team, you’re going to respond.”