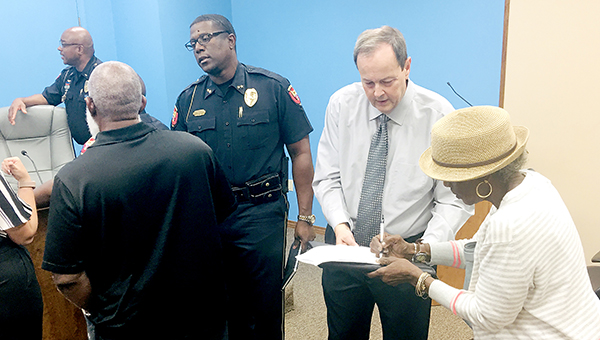 Downtown security and traffic enforcement were two major topics of concern during a public safety town hall held by the Vicksburg Police Department.

The meeting, held at the Robert M. Walker Annex Building, was called to discuss residents’ concerns and issues involving public safety in the city.

Unlike previous public hearings, the program was not broadcast, and all questions addressed to the department’s administration were in writing. All but one were emailed from residents in advance of the meeting.

“I think it was a good program, and I think the responses to the questions we gave were good,” Police Chief Milton Moore said.

“I think it went OK,” Deputy Chief Bobby Stewart said. “I’m sure there were more questions that were wanted to be asked so people could hear some of the concerns of some of the other people in the community and get them addressed. It went well.”

“It was good to see an interest in public safety,” said police department public information officer Capt. Mike Bryant, who was the moderator for the meeting. “We had some very good questions, and I believe our chiefs gave some good responses.”

The questions regarding downtown security concerned police department initiatives to prevent crime in the downtown area, and the presence of homeless people and panhandlers in the downtown district.

“We pay officers overtime to come out during the weekends in plain clothes to case the downtown area and the garages,” Moore said. He said the department’s mobile camera has also been used.

He said the city has installed cameras in the area, and Mayor George Flaggs Jr. called for installing more cameras in the downtown parking garages and at the garage entrances.

One question involved posting “no loitering” in the downtown area so panhandlers and homeless people could be removed from the area.

Moore said no loitering signs can be installed on private property, but not on public property. If a property owner has a problem with someone, he said, they can call the police department and sign charges.

According to an American Civil Liberty Union letter sent to cities in September, a series of court cases have found panhandling and begging laws unconstitutional because they violate the free speech provisions of the U.S. Constitution.

Recently, the U.S. Fifth Circuit Court of Appeals decided in Blitch vs. City of Slidell, La., that the city’s panhandling ordinance was unconstitutional because it violated the First Amendment rights of people asking for money anywhere within the Slidell city limits.

Deputy Chief Eric Paymon said the most officers can do with loiterers is “ask them to move along.”

“By law, we can’t actually arrest them for being in that area,” Paymon said. He said if anyone had problems with someone in the downtown area to call the police.

In a related question, a person asked if police are enforcing state law prohibiting guns in nightclubs.

“As far as officers going into bars and establishments to see if bar owners are abiding by the law. It is unreasonable and it is against the law for us to go in there and check everybody there to see if they have a gun,” Stewart said. “It’s up to the bar owners to police themselves.”

If, however, they call police because they think someone has a weapon, officers could go in and check that particular person, he said.

On questions about traffic enforcement and speeding on Interstate 20, Moore said over the past three months have averaged 450 traffic citations per month.

Concerning cameras on streets, Moore said the city has cameras at major intersections and on Clay and Washington streets. He said the city does not have traffic cameras because they are illegal under state law.

Responding to a question on speed bumps, Moore said, he recently attended a meeting involving installing speed bumps. He said the city will have to determine a standard for speed bumps and then determine which streets to put them.