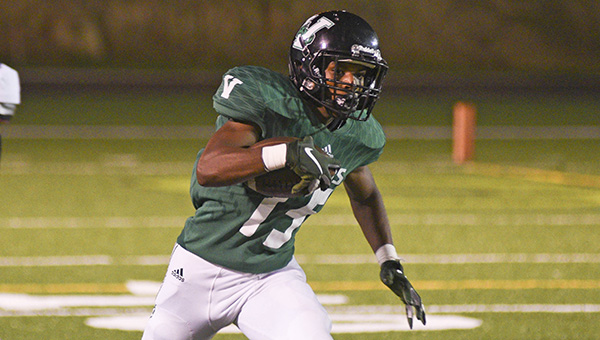 Vicksburg High wide receiver Keveon Smith (15) runs with the football against Cleveland Central last week. The Gators, at 0-3 in Region 2-5A, will try to begin a late playoff push when they host Ridgeland on Friday night for homecoming. (Courtland Wells/The Vicksburg Post)

There’s no doubt the Vicksburg Gators have backed themselves into a corner.

A five-game losing streak and 0-3 start in region play have put them in a position where they need to win the rest of their games to secure a playoff berth.

The good news is that there is still a path out of it.

The Gators (1-6, 0-3 Region 2-5A) host first-place Ridgeland (6-1, 3-0) on Friday. It, like every game from here on, is a must-win. And, even though it sounds simple, coach Tim Hughes said the journey to the playoffs must begin with a couple of simple steps.

“There’s no one play you can have that’s going to win four games. There’s not one quarter of work that is going to win four games. But you win each and every play, you win every series, you start winning each quarter and half, now you start winning a game and then you get to start winning multiple games,” Hughes said. “It’s like I tell them, you’re good enough and talented enough. You still get to go play ball against everybody else. We are talented enough. We just have to have the confidence about it. If we can scratch, fight and claw to gain that confidence I think it will snowball through the rest of this season.”

Although Vicksburg and Ridgeland are on opposite ends of the spectrum as far as records go, Hughes said facing the Titans is a good place to start a long shot run. The teams run similar schemes on both offense and defense, which should bring a comfort level that might not exist with other opponents.

Ridgeland quarterback Zy McDonald has thrown for 1,748 yards this season, with 12 touchdowns and three interceptions.

His Vicksburg counterpart, Sha’Kori Regan, has 1,036 total yards — 877 passing and 423 rushing. He has thrown for six touchdowns and run for a team-high six.

Senior running back Cedric Phillips leads the Gators with 708 rushing yards and four touchdowns, and is averaging 8.3 yards per carry. He also has 13 pass receptions.

“It’s what we do. We run on offense and defense kind of what they run. We’re going to be really used to what they’re doing. It’s going to be an effort game. We’ve got to clean some things up as far as execution, but if we can come out there with the right kind of attitude then I think it’s a ballgame we can win,” Hughes said. “The parity is still there when you watch it. It’s not just something overwhelming.”

The gap between the Gators and a winning record is also not as big as it seems. They lost by one point to Benton (La.) in overtime, and let a fourth-quarter lead slip away against Provine. Last week, against Cleveland Central, they trailed 21-17 at halftime and wound up losing 34-24. The Gators had 197 yards of offense in the first half, and only 64 in the second.

Much like winning, Hughes said losing has a snowball effect. It starts with a couple of plays here and there, and quickly adds up. The challenge this week is to find those few plays that make the difference and turn them into positives rather than negatives.

“It’s that snowball effect. It just keeps rolling and we’ve got to stop it somehow. If we can get this week, we’ve still got a shot to do what we wanted at the beginning of the year. Even if that doesn’t happen for us, anything to show success,” Hughes said. “We’re one or two things away from being 2-1 in district rather than 0-3. We could be sitting at three more wins and three less losses, and all of a sudden everything is looking a little different.”