Vikings earn their ticket to the playoffs 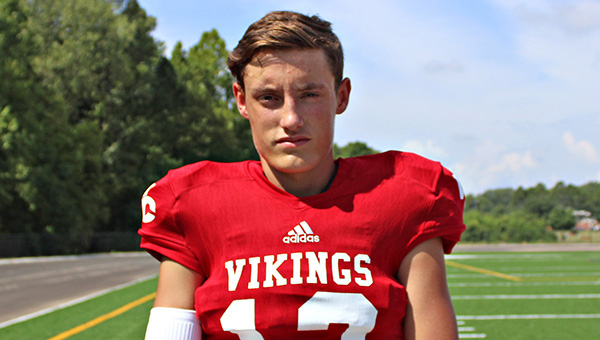 Warren Central quarterback Parker Kivett completed 13 of 22 passes for 172 yards and one touchdown in a 13-6 win over Clinton on Friday.

CLINTON — Warren Central is heading back to the playoffs. The only question now is how high it can climb in the standings.

Behind a stellar defense and the play of quarterback Parker Kivett, Warren Central was able to hold off rival Clinton 13-6 at a rain-soaked Arrow Field on Friday night and clinch a berth in the MHSAA Class 6A playoffs.

WC finishes the regular season at South Panola on Nov. 8. Those two teams are tied for second place after South Panola beat Madison Central 38-34 on Thursday.

“Thought we carried out our game plan really well and played really well in all three phases,” Warren Central coach Josh Morgan said. “We knew we had to make some explosive plays offensively and we did at crucial times. Two teams are playing for the same thing and that’s a playoff spot and our kids earned it.”

The score remained that way until Warren Central’s final drive of the first half.
Following a Jason Williams interception, the Vikings got the ball at their own 18-yard line with 36 seconds left. On first down Kivett connected with Kentrick Thompson on a 22-yard pass, followed by passes of 5 yards to Demond Patton and 31 yards to Antonio Thomas to get the ball to the Clinton 24-yard line with eight seconds left.

Kivett then ran for 13 yards and Josh Griffin connected on a 28-yard field goal as time expired to tie the game 3-3 at halftime.

Griffin tacked on another field goal, this one from 36 yards, to give the Vikings a 6-3 lead with 8:05 left in the third quarter.

The only touchdown of the game came with 1:33 left in the third quarter when Kivett found Patton on a 45-yard pass to extend the Vikings’ lead to 13-3. Kivett finished the night 13-of-22 passing for 172 yards with the one touchdown.

“It was a designed play. I didn’t know where he was, so I stepped up in the pocket thinking I was going to run and there he was, so I dumped it to him and he did the rest,” Kivett said of the touchdown. “I started off slow with the conditions being bad, so I just did what I had to do.”

The Arrows got the ball back with 2:14 left and a chance to tie. They reached the Warren Central 48-yard line, but a sack by Chris Winston on third down sealed it for the Vikings.

“We just trust each other on defense,” said WC linebacker Malik Sims. “Against that type of offense you just have to read the fullback and step up and make a play. This was a big win for us.”

Story by Brandon Shields, special to The Vicksburg Post