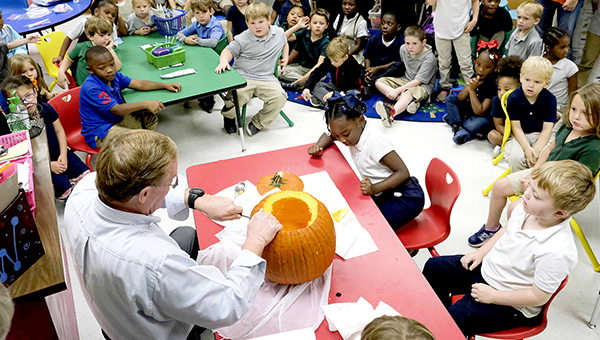 Deputies with the Warren County Sheriff’s Office and officers with the Vicksburg Police Department will be out in force Thursday as witches, ghosts, goblins and other disguised tricksters make their way through neighborhoods.

The city of Vicksburg and Warren County have set 5:30 to 8 p.m. as the time for trick-or-treating.

“All deputies will be on duty patrolling subdivisions in the county and county roads,” Warren County Sheriff Martin Pace said. “We will have zero tolerance for traffic violations. We ask motorists to be extremely careful when they’re on the road Thursday night and watch out for children.”

He said parents should accompany their children as they make their rounds, and go trick-or-treating in their own neighborhoods or in neighborhoods they are familiar with.

“We urge parents not to let their children go by themselves, especially in an unfamiliar neighborhood where they may get lost,” Pace said.

He also offered the following advice for parents and trick-or-treaters:

• A responsible adult should always accompany younger children as they trick-or-treat, and older children should travel only in familiar, well-lit areas and stick with their friends.

• Do not go inside the house or car of a stranger.

• Children should not eat any treats until they return home

• Children and adults are reminded to put their electronic devices down, keep their heads up and walk, don’t run, across streets.

• Cross the street at corners, using traffic signals and crosswalks. Look left, then right, and then left again when crossing and keep looking as you cross.

• Always walk on sidewalks or paths. If there are no sidewalks, walk facing traffic as far to the left as possible.  Children should walk on direct routes with the fewest street crossings.

• Decorate costumes and bags with reflective tape or stickers and have kids carry glow sticks or flashlights to help them see and be seen by drivers.

• Drivers, slow down and be especially alert in residential neighborhoods. Watch for children walking on roadways, medians and curbs, and enter and exit driveways and alleys carefully.

This year, parents will have an alternative to taking their children trick-or-treating in the neighborhoods.

Blacks in Government and the city of Vicksburg are sponsoring a trunk or treat from 5:30 to 7:30 p.m. at the City Park pavilion.

“Cars will be parked under the pavilion and the children will be able to trick-or-treat from the trunks,” said Derrick Stamps with Blacks in Government. “We will have hot dogs and Kool-Aid.”