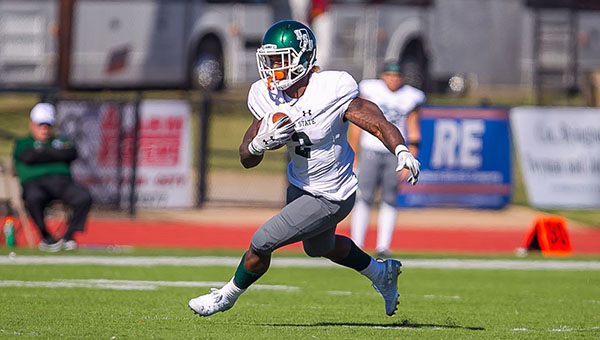 Delta State running back Rico Owens (2) carries the ball Saturday against Shorter. Owens broke off a 90-yard touchdown run in the first quarter and finished with 149 yards on only nine carries as the Statesmen won 38-6. (Delta State Athletics)

Rico Owens ran for 149 yards and a touchdown — most of it on Delta State’s longest touchdown run in 64 years — and the Statesmen piled up 280 yards on the ground as they pummeled winless Shorter 38-6 on Saturday.

Breck Ruddick was 26-of-34 passing for 203 yards and two touchdowns for Delta State (5-3, 4-2 Gulf South Conference). Deion Dampier rushed 18 times for 68 yards and had five receptions for 26 yards and a touchdown. The Statesmen finished with a season-best 510 yards of total offense.

Owens ripped off a 90-yard touchdown run in the first quarter that was not only a career long, but one of the longest in Delta State history. It was the program’s first rushing touchdown of 90 yards or more since Carl Grubb’s 95-yard run against West Alabama on Nov. 5, 1955.

Shorter (0-9, 0-7) lost its 48th consecutive game, the second-longest streak in NCAA Division II history. The Division II record for consecutive losses is 52, set by Lock Haven from 2007-12. The Hawks had 10 rushing yards, and 136 total yards, while committing three turnovers.

Texas Lutheran scored 27 staright points in the first half after Belhaven took an early 7-0 lead on a 19-yard touchdown pass from Hunter McEachern to Mario Asagunla.

McEachern finished the game 20-of-37 passing for 212 yards, with two touchdowns and two interceptions.

Russell caught 11 passes for a career-high 208 yards, and Tezzo caught five for 101.

Fritz Walker added 89 rushing yards and a touchdown on 24 carries for the Majors, who finished with 644 yards of total offense.

West Georgia scored 28 unanswered points in the second half after the Choctaws jumped out to a 21-7 lead in the first quarter. John Hurst caught three of Bass’ four touchdown passes, for 64, 5 and 9 yards, and finished with five receptions for 93 yards.

Mississippi College quarterback Detric Hawthorn ran for 142 yards and a touchdown, and also threw a 28-yard TD pass to Drew Croegaert. Jordan Wright scored on a 4-yard run late in the first quarter.

The finished with 296 total yards, but only 93 of those came in the second half.

Jackson State 21, UAPB 12
Jalon Jones threw for one touchdown and ran for another score as Jackson State beat Arkansas-Pine Bluff on Saturday night.

Jones had 162 passing yards for the Tigers (4-5, 3-1 Southwestern Athletic Conference).

The scoreless first quarter featured multiple mistakes by both teams, including a fumble and an interception by Jackson State and an interception and missed field goal by Arkansas-Pine Bluff. Jones struck early in the second quarter on a 72-yard touchdown throw to Terrell Kennedy III and the Tigers led 7-0 at halftime.

Shannon Patrick hit Dejuan Miller for another Pine Bluff score, but the two-point conversion try failed. Josh Littles returned the ensuing kickoff 94 yards for a touchdown and the Tigers led 21-12.

Patrick threw for 227 yards and a score for the Golden Lions. He was intercepted three times.

Davis scored on a 3-yard run five minutes into the game to put the Hornets in front, 7-0, and his 52-yard pass to Jahod Booker early in the second half made it 24-0.

Alabama State held the Delta Devils to just 217 yards of total offense, 100 through the air.