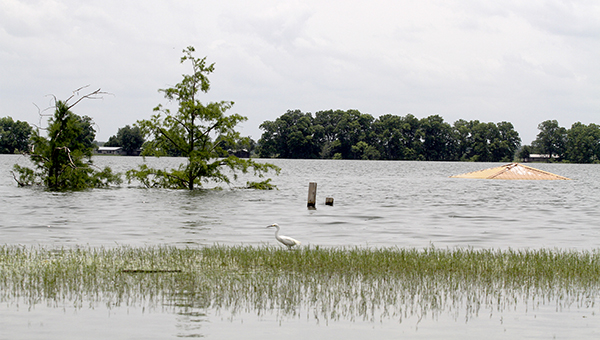 An egret walks along a grassy area as the roof of a pier is seen poking through flood water in the Eagle Lake community in May. (Courtland Wells/The Vicksburg Post)

It has been sent to the Senate for a vote.

“We were able to get it out of (the) Rules (Committee) as soon as Rules was formed,” Ford, R-Vicksburg, said. “It was the second thing taken out of Rules this year in hopes we can get it out of the House and Senate in time to get it to the Corps of Engineers and the EPA before they make their decision.”

The Corps and the EPA, he said, are going to develop a plan, “And we just wanted to come up with something to show the EPA and the Army Corps of Engineers so they knew where the state of Mississippi stands on support of the pumps.”

The pumps were expected to move 14,000 cubic feet of water per second from the land or Delta side of the structure to the riverside if and when gates were closed due to high river stages. The pumps were vetoed by the Environmental Protection Agency in 2008.

During the 2019 flood, flooding in the Yazoo Backwater Area reached a record level of 98.2 feet, flooding 548,000 acres, including 231,000 acres of flood land. The backwater flooding also closed Mississippi 465, and Mississippi 1 and 16 to traffic, forced people from their homes and flooded the Eagle Lake community.

Residents in the backwater area and county and Levee Board officials said having the pumps would have reduced the backwater flooding.

Ford said he does not know how the Senate will vote on the resolution, adding state Sen. Briggs Hopson, R-Vicksburg, supports it.

“I’m hoping every Mississippian is behind the pumps, and everybody in the Capitol I’ve talked to has been behind the pumps,” he said. “We need our pumps. The people in the Delta are hurting and we need to do everything we can at any level we can to help.”