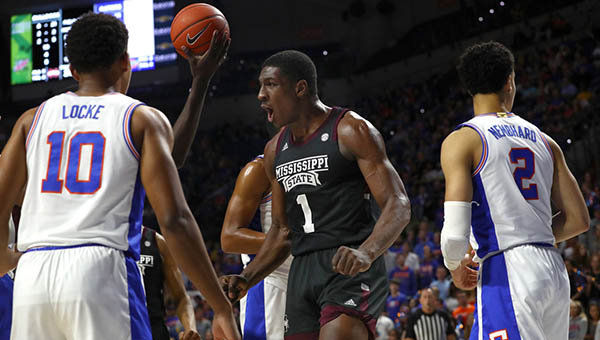 NASHVILLE, Tenn. (AP) — Reggie Perry of Mississippi State and Mason Jones of Arkansas have been named The Associated Press Southeastern Conference players of the year.

Texas A&M’s Buzz Williams was named SEC coach of the year in his first season in the league. Williams guided the Aggies to a 10-8 conference record and finished in a tie for sixth in the league. Texas A&M was predicted to finish 12th in the SEC when the season began.

Perry, the only SEC player to average double figure points and rebounds this season, and Jones, the conference’s top scorer at 22 points a game, each received four votes from the panel of 14 AP voters.

Perry became the second player in Mississippi State history to earn SEC Player of the Year honors — joining Lawrence Roberts in 2004 — and tucked away All-SEC First-Team accolades by both the coaches and media.

Perry also won the C Spire Howell Trophy on Monday, which is given to the top college player in Mississippi.

Mississippi State won 11 of its last 15 SEC games to earn a top 4 finish in the conference standings, the program’s highest overall finish since the 2010-11 season. It will play in the SEC Tournament quarterfinals on Friday against either Ole Miss, Georgia or Florida.

Both Perry and Jones were the only unanimous selections for the AP All-SEC first team. Joining them on the first team are Kira Lewis Jr. of Alabama and the Kentucky duo of Immanuel Quickley and Nick Richards.

Quickley was named the league’s Player of the Year in voting by coaches.

Anthony Edwards, the Georgia freshman and possibly the No. 1 overall pick in the upcoming NBA draft, was the runaway pick for newcomer of the year. The 6-foot-5 guard averaged 19.5 points a game.

Edwards was also named to the AP All-SEC second team along with Breein Tyree of Ole Miss, Skylar Mays of LSU, Samir Doughty of Auburn and Keyontae Johnson of Florida.
Tyree, Doughty, Johnson and Mays were also first-team picks by the coaches.

Carter has improved his points, rebounds, assists and steals averages during each of his four seasons at Mississippi State. He has piled up 1,352 career points which currently ranks 19th in State history and is fourth among SEC active players behind Tyree, Mays and Tennessee’s Jordan Bowden.