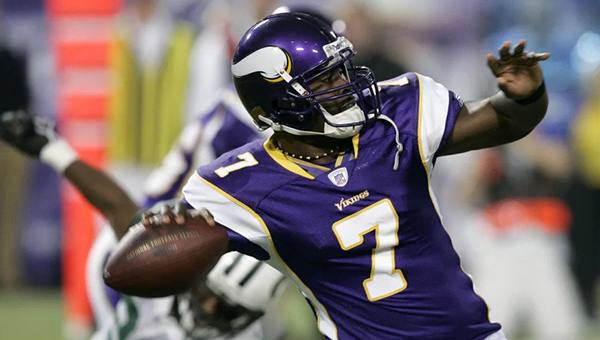 Former Minnesota Vikings quarterback Tarvaris Jackson throws a pass during his NFL career. Jackson, who is one of only 10 SWAC quarterbacks ever selected in the NFL draft, was killed in a car crash Sunday night in Montgomery, Ala. (Courtesy of the Minnesota Vikings)

MONTGOMERY, Ala. (AP) — Former NFL quarterback Tarvaris Jackson died in a one-car crash outside Montgomery, authorities said Monday. He was 36.

The 2012 Chevrolet Camaro that Jackson was driving went off the road, struck a tree and overturned at 8:50 p.m. Sunday, Trooper Benjamin “Michael” Carswell, an Alabama Law Enforcement Agency spokesman, said in a news release. Jackson was pronounced dead at a hospital.

The wreck occurred on Pike Road, about seven miles south of Montgomery, his hometown. No other details were immediately released about the crash, which remained under investigation.

Jackson was hired as quarterbacks coach for Tennessee State last season after a 10-year NFL career with the Seattle Seahawks, Minnesota Vikings and Buffalo Bills. He played college football at Alabama State.

“Our thoughts and prayers go out to the Jackson family in this time of bereavement,” Tennessee State football head coach Rod Reed said. “We are devastated. He was an awesome young man and he will be missed by our players, our staff and the TSU family.”

Seattle quarterback Russell Wilson also posted about Jackson’s death: “TJack… you will be missed. Praying for your family…Love you man.”

Jackson was a second-round draft pick of the Vikings in 2006, out of Alabama State. He is one of only 10 quarterbacks from the Southwestern Athletic Conference ever selected in the draft, and one of only three to be picked in the first two rounds. Alcorn State’s Steve McNair (1995) and Grambling’s Doug Williams (1978) were the other two.

Jackson, who started his college career at Arkansas before transferring in 2003, led Alabama State to the 2004 SWAC East Division title. He was selected to the All-SWAC team in 2005 and threw for 7,367 yards and 64 touchdowns, and ran for 11 TDs in his college career.

He returned to Alabama State as a quality control coach in 2018, and was hired as Tennessee State’s quarterbacks coach in 2019.

“He affected so many in this community with his willingness to serve and teach the game of football to the youth in Montgomery,” Alabama State Director of Intercollegiate Athletics Jennifer Lynne Williams said in a statement. “He impacted so many lives in and around Alabama State and the city of Montgomery. A humble young man, he will be truly missed and will be remembered as one of the true legends of Alabama State football.”

Jackson started 12 games with the Vikings in 2007, went 8-4 and helped them reach the playoffs. He was part of the Seahawks’ Super Bowl championship team in 2014 and played late in their 43-8 win over Denver in Super Bowl XLVIII.

Jackson started 14 games for Seattle in 2011, leading the team to seven wins. He finished his career with a 17-17 record as an NFL starter. His last three seasons were spent in Seattle as a backup to Wilson.

Jackson passed for 7,263 yards with 39 touchdowns and 35 interceptions.

Jackson is survived by wife Lakitta and three children.