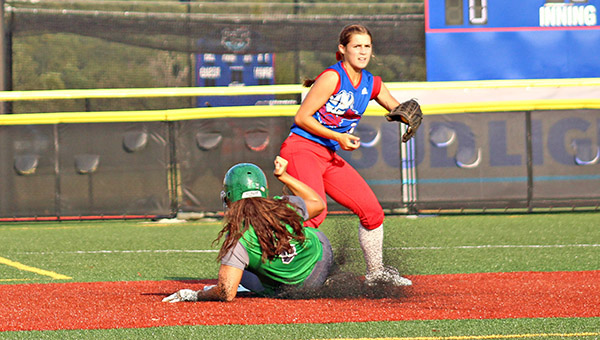 Kaylee Hoeft has never been to Coahoma Community College. Her knowledge of its softball program is limited to word of mouth referrals and telephone conversations with its coaches.

Coahoma Community College Whitney Brinston has not met Hoeft in person. Her knowledge of the Warren Central infielder is limited to game tapes, coach’s referrals and those same telephone conversations.

That was good enough to take a leap of faith and commit to each other for the next two years.

Hoeft signed with Coahoma last week, nearly sight unseen on both sides. It capped a recruiting process made strange by the coronavirus outbreak, and hopefully started a mutually beneficial partnership.

“It was crazy. (Warren Central coach Dana McGivney) told the seniors about Coahoma, and I got the coach’s number and contacted her. She said you can’t come up here and look at the campus, everything is shut down, and she couldn’t come watch me play. She just had to go off of what people said and the videos I had. So I think on both ends it was very crazy and a chance that we took,” Hoeft said. “It’s a bunch of trust. But I think it’s going to be a great opportunity for me.”

Hoeft was having a great senior season when the COVID-19 outbreak brought it to a screeching halt in mid-March. The five-year starter was hitting .385 with 10 RBIs as the Lady Vikes jumped out to an 11-0 record.

Hoeft tripled and scored two runs in what turned out to be the final game of the season, a 5-2 victory over Loyd Star on March 14. The Mississippi High School Activities Association suspended competition that night, and on Wednesday the organization canceled the remainder of the spring sports season.

Hoeft was one of five Warren Central senior softball players who played their final high school game on that Saturday afternoon in Brookhaven.

“Everybody wants to play their full senior year and have a memory of having their senior year, and we don’t really get that. It sucks. There’s no other way to put it, I guess,” Hoeft said. “But I’m happy we got to play the 11 games we played and won all of them.”

Hoeft, though, was more fortunate than many senior athletes in Mississippi. She’ll get to play again.

During the state’s athletic hiatus over the past month, her long-distance recruitment by Coahoma turned into a scholarship offer. Rather than a traditional signing ceremony in Warren Central’s library she simply signed the letter of intent and mailed it back. She still has never set foot on Coahoma’s campus.

“I’ve played in the surrounding areas with tournament ball, but not at Coahoma,” Hoeft said. “I’ve seen pictures and have known people that have gone there. I’ve also talked to people that have been there. I’m feeling very good about my decision and I’m ready to see what it’s like come fall, hopefully.”

Hoeft said that she’s stayed in shape by doing softball drills at home, and running and throwing as much as possible. Staying in a routine has been more difficult than staying motivated, even as the prospect of the high school season being finished grew more likely.

“I’ve been working out. Me and my mom have been going outside and doing drills and throwing. I’ve been swinging a bat. Then in the classroom I’ve been doing all of my work and even some more, just to pinpoint spots that I need to work on,” Hoeft said. “It’s hard, because I was in such a routine. Then it just turned into, ‘Oh, you can lay in bed all day instead of having to go to school!’ I’ve been trying to put myself on a schedule so I make sure I have my schoolwork done, I have my workout, I’ve done something with the softball.”

Now, though, she has something more to work toward. A brighter day. A second chance. Another game.