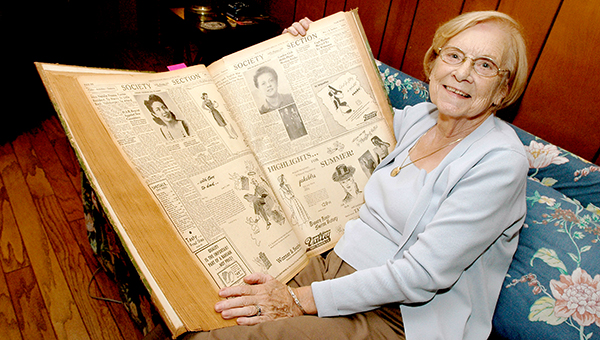 Dorothy Lack looks over old newspaper clippings at her home in this 2008 file photograph. Lack died Thursday at the age of 93. (Suzanne Feliciano/The Vicksburg Post)

Lack: I’ve had the best of both worlds

Gordon Cotton, a beloved Vicksburg author and historian, wrote this feature on Mrs. Dorothy “Dot” Lack that published in The Vicksburg Post on July 4, 2008. We are republishing the story today given the sad news of Dot’s passing. You can view her obituary here.

War bride from England has had ‘the best of both worlds’

Dot Lack was sitting in her den, surrounded by books, flowers and family photographs, musing about her two lives — one in England, the other in America.

Dot’s story is one of British-American relations on a personal level, for she came here as a war bride. And there’s a bit of irony about her arrival: She got here in 1945, just in time to see Vicksburg celebrate Independence Day for the first time in 80 years. It was also her first wedding anniversary.

She grew up a very proper English girl in Derbyshire and was always called Dorothy, but then she met Denson Lack, became his bride, and moved to America wherein a more relaxed atmosphere most everyone called her Dot.

“I was a spoiled, spoiled child — the only grandchild for many, many years in a family that absolutely adored me,” she said, and at the school, only six houses down the street, she was teacher’s pet “because I was kind of smart.”

She also sang, from the time she was 6 or 7, at all the major church functions such as Mothering Sunday (Mother’s Day here), and at 81 she quickly recalls the words to one song: “Oh, Jesus loved his mother and took her flowers, I know …”

“Nobody knows how frightened to death I was,” she said. “I stood up there and trembled the whole time.”

Her church singing came to an end when she got older “and was not so cute.”

She recalls little about World War II, other than the sound of sirens, warning of German planes following the river, hoping to find and bomb the Rolls Royce plant 12 miles away. She knew nothing of the war except for rationing and what she had heard about American soldiers stationed in England, and it wasn’t very good, though she had never seen an American “until I met my husband.”

After attending a Church of England school in her hometown, Dorothy took a test to determine her eligibility for higher education. She was awarded a scholarship, and her secondary schooling was about the equivalent of a college education. She later moved to Nottingham, and one evening she went to the theater to see the movie “Stage Door Canteen.” The building was full, so she and others stood in line waiting for the next show.

That was when she met her future husband: “He saw me from across the street and came over and stood by me. He was the last person that I even wanted to speak to. We stood there and he tried to talk to me and I would not talk to him. I positively refused. We had been standing there about an hour — which was nothing new to me — when this silly, little man with a tin whistle started walking up and down the gutter playing tunes and collecting money, and everyone was laughing, and we all sort of relaxed and started talking.”

When they went into the show, Denson tried to buy her ticket, but she refused. Then he asked if she minded if he sat by her, and she replied, “I guess not.”

At intermission, they talked some more, and he told her why he had come to Nottingham: “They always said there were good-looking girls here.” He wanted to know if he could write to her, and they began corresponding.

She became Mrs. Denson Lack on July 4, 1944, at the Registry office. They didn’t have a church wedding because he said he couldn’t understand the English accent.

Coming to America a year later was a traumatic experience. For months, Denson had tried to get her on the list of war brides, and finally, she was given two days notice to get ready to catch the boat. After frantic packing and emotional goodbyes to her family, she arrived only to be told by an official that she was a day early. Back the next morning before daylight, she was told her boat had sailed the day before. Denson’s commanding officers called authorities and strongly suggested that they make room for Mrs. Lack on the next boat, so a few days later she sailed — along with 62 other war brides and many, many wounded soldiers — for New York.

Though she had corresponded with her husband’s family, and they had sent her gifts, she was “sort of scared” about her arrival here in June 1945.

A story in the Vicksburg Herald told of her arrival and quoted her father-in-law, “Why, she’s not a bit different from us. She almost talks like we do.” The Herald reporter noted that she spoke with “a typical British accent, but with American informality.”

She remembers that she “didn’t have to get used to much. I just sort of dropped in.”

Denson and Dot lived in Yazoo City and Jackson before coming back to Vicksburg, a place she said she always liked partly because of its history. They reared five children — Margaret, Carol, Bonnie, David and Richard. Denson, who ran a convenience store, died in 1985.

Until she retired, Dot was assistant trust manager at Merchants Bank, working for Joe Sullender who called her “the foreign department. On election day he would say, ‘Alright, everybody go out and vote, all except Dot Lack.”

Dot has never changed her nationality, for she promised her father — “the kindest man in the world” — that she would never give up her British passport.

Dot has been home to England numerous times and, she said, “I didn’t come here to get away from England. I had it so good there, and I’ve had it so good here, too. I’ve had the best of both worlds.”

“How did I wind up here?” Dot said, and she asked her children.

“Mama, you fell in love,” was the reply.

PORT GIBSON — Entergy confirmed Wednesday that some of its employees at the Grand Gulf Nuclear Power Station near Port... read more