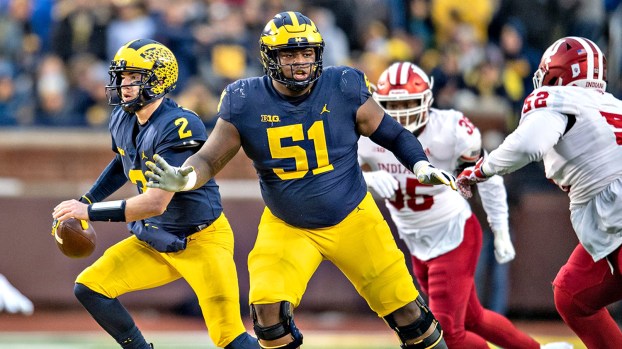 The New Orleans Saints selected Michigan center Cesar Ruiz (51) in the first round of the NFL draft on Thursday night. (University of Michigan Athletics)

The 6-foot-3, 307-pound Ruiz joins a unit that has all five starters returning, including center Erik McCoy, who was New Orleans’ top draft pick a year ago in the second round.

The Saints, however, value linemen who have versatility and coach Sean Payton made it clear that Ruiz will have an opportunity to compete for a starting role at any of the interior line positions.

“We weren’t drafting someone that high to come in and be a backup,” Payton said. “He was one of the better interior linemen I’ve seen in a while.

Last season, the Saints started McCoy as a rookie at center, but Payton expressed confidence McCoy also has the “flexibility” to play guard. New Orleans’ starting guards last season were 2015 first-round pick Andrus Peat, who last month signed a five-year, $57.5 million extension, and Larry Warford, who is entering the final season of a four-year, $34 million contract he signed in 2017.

“Every one of these guys is going to come in and compete. So, Larry’s going to have to compete,” Payton said. “That’s how you improve your team.”

The pick should at least strengthen the unit responsible for protecting record-setting 41-year-old quarterback Drew Brees.

“I can play any position along the interior. I have familiarity with everything,” said Ruiz, who grew up in Camden, New Jersey. “Wherever coach wants me to play, I’m going to play.”

Ruiz started five games at right guard for Michigan as a freshman. He started all 13 games as both a sophomore and junior at center, and was named second-team All-Big Ten last season.

Moments after he learned of his selection, he could be seen lowering his head and starting to break down, briefly covering his face with one hand before composing himself with deep breaths as he sat on a couch with his mother and a couple close friends. At age 8, Ruiz lost his father, who was killed by a moving vehicle while trying to help another motorist change a tire on a roadside.

“I was thinking about my dad. I dedicate my whole journey — everything I do — to him,” Ruiz said. “A big part of it was also the excitement and the release.”

The Saints have most core players back from the past three seasons, all of which included NFC South Division crowns — and 13-3 records each of the past two regular seasons.

With no glaring holes no the roster, the Saints had the flexibility to choose the player they liked best, regardless of position.

It appeared that a playmaking linebacker or receiver could help New Orleans most.

One pick before the Saints were on the clock, the Los Angeles Chargers traded up for New England’s 23rd overall choice and took Oklahoma linebacker Kenneth Murray, who was just the second linebacker taken overall. Still, some leading linebacker prospects were available when the Saints made their selection. They included Texas Tech’s Jordan Brooks, who Seattle took three picks later, and LSU’s Patrick Queen, whom Baltimore drafted 28th.

Five receivers were taken before the Saints’ selection, but those still available at pick 24 included Arizona State’s Brandon Aiyuk, who was taken 25th overall by San Francisco, and Clemson’s Tee Higgins, who was not selected in the first round.

Instead, New Orleans went with Ruiz, who joins an offense that ranked ninth in the NFL last season, averaging 373.9 yards per game, including 265.3 yards through the air and 108.6 yards on the ground.

Ruiz sees pass protection and the ability to pull out to block on screens among his strengths — something that should come in handy considering the way New Orleans uses dynamic running back Alvin Kamara in the short passing game.

“I see how the Saints play,” Ruiz said. “Just a versatile offense and I’m a versatile player. So, I fit perfectly.”

The Saints do not have a second-round, having traded it last season to move up and get McCoy. Their next pick is in the third round, at No. 88. Rounds 2 and 3 of the draft are Friday night, and rounds 4-7 on Saturday afternoon.

The Saints’ late-round picks are at No. 130, 169 and 203. They traded away their seventh-rounder, No. 238 overall, to the New York Giants last season to acquire cornerback Eli Apple.

Photo Gallery: Getting back on course at Clear Creek

Clear Creek Golf Course reopened on Monday, following a two-week shutdown to abide by county and state restrictions regarding the... read more