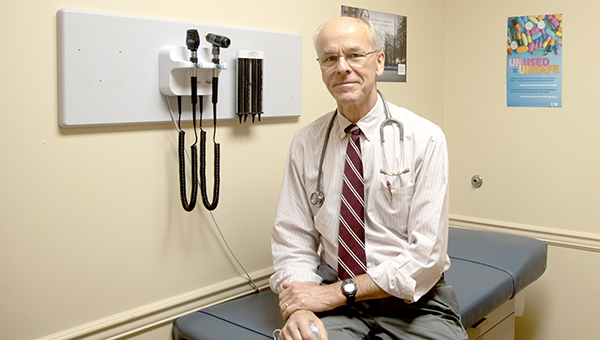 Vicksburg pediatrician set to retire after caring for thousands of children

A month’s stay in Vicksburg would ultimately turn into a forever home for Dr. Gordon Sluis.

The New Jersey transplant first arrived in the community in 1978 to do a pediatric rotation at Cary Christian Center, a facility geared toward serving the poor.

He commuted with other doctors to Cary while living in Vicksburg.

After his time at Cary, he graduated from John Hopkins Medical School in Baltimore and then pediatrics training at the Children’s Hospital in Pittsburgh, and then permanently returned to Vicksburg in 1982.

Sluis, after serving the Vicksburg community for nearly four decades, is retiring. His final day as a pediatrician at Merit Health River Region is set for Wednesday.

“I’m 66 in four months, and we have four — soon to be five — grandchildren, and I have been doing this for 37 years and appreciating my other options,” Sluis said of his decision to retire.

While ending his professional career at River Region will offer other opportunities, like spending more time with family, Sluis said the decision is bittersweet.

Not only will he miss the camaraderie of fellow doctors, nurses and therapists, he said, but he will also miss the children.

“The thing I will miss the most is having babies on my lap, examining babies on my lap, and engaging a young child in a way that brings them out of themselves,” Sluis said. “I enjoy drawing out a child in conversation, especially a 2- or 3- or 4-year-old child who gets asked questions and they have some funny answers and you start going down that little rabbit trail and find out how they think.”

Sluis began his career in Vicksburg at what was then the Vicksburg Clinic, located on Grove Street. In that time, he guesses he has “probably” seen around 120,000 patients, spanning two and now three generations.

“It’s been a lot of fun to see family dynamics play out over multiple generations, to see the children of former patients and sometimes grandchildren of former patients,” Sluis said. “It will be sad to say goodbye. A slow-growing highlight has always been the friendships and relationships that grow over time along with the enjoyment of being trusted by people and seeing that you can make a difference in how people think about their children by how they’re treated.”

Other highlights from his career have included treating premature babies who grew to become healthy children, and watching those children beat the odds.

Sluis recalled one patient he had taken care of since birth.

“She wound up having a liver transplant,” he said. She is now a thriving young adult.

There were also patients who have remained in Sluis’s heart that had less successful stories. One was a grade-school child who was suffering from depression.

“I remember calling his principal and I was crying because it was just so sad to see him hurt in his spirit,” he said.

With his conviction to care for all children no matter their insurance source, which Sluis said was a “widely accepted” practice at River Region, retiring from his position at the hospital will not close the door on his journey of making a difference in the lives of children.

“Christians are called to be ‘salt and light’ in our lives. I’ve tried to put that into practice in my relations with patients, families, and coworkers,” Sluis said.

One thing he hopes to accomplish upon retiring will be to help bring awareness to disadvantaged children. Sluis believes that by addressing adverse childhood experiences early it could prevent or curtail problems later in childhood or adulthood.

“One of my goals is to get the community more aware of the damaging effects of adverse childhood experiences in young children,” he said.

Sluis is married to the former Jennifer George and the couple has three children, Hannah (John-Michael Forman), Emily (Andrew Hendrix), and Daniel (Gracie).